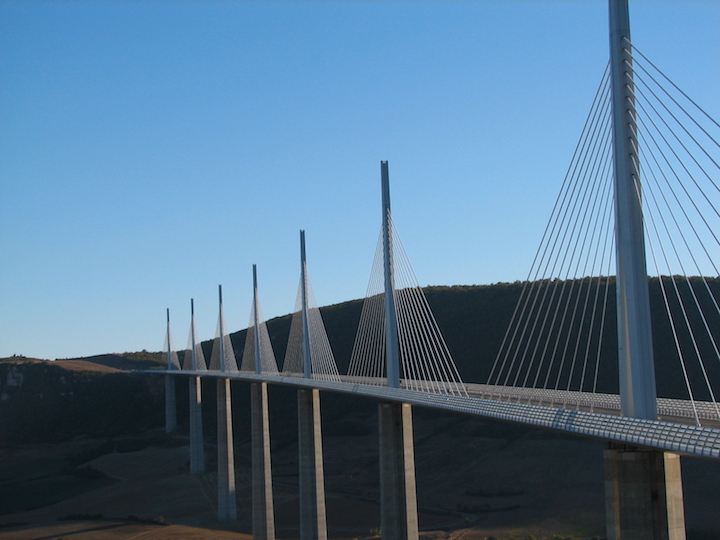 Gluttons for punishment, my kid and I headed to Montpellier on Sunday to visit a retailer not found in Carcassonne nor even in Toulouse. While shops in France usually are closed on Sundays, they open on the three or four Sundays before Christmas. Add to that the fact that only semi-trucks carrying refrigerated goods are allowed on the autoroutes, and Sunday seemed ideal.

From the start, things went wrong. I stopped to buy gas and put air in the tires before getting on the autoroute. The station had been flooded in October, and I hadn’t been back for a while, what with the roads out and detours. Turned out it was closed for renovations. No other gas stations before the autoroute, but, hey, no problem, the tank was almost full; my itsy bitsy car needs only about a half a tank to make the 300-kilometer roundtrip.

We would park at the shopping mall with said retailer, then take the tram to the city center, to avoid having to drive all over the place. I finally got a phone with a GPS, so I  didn’t need to write out the directions from Mappy. Such luxury.

We sang Christmas carols and admired the moody, haunting countryside on the way. It looked almost like shan shui paintings at the Musée Cernuschi in Paris. The light rain swathed a gray veil over the winter greenery. So different from summer’s parched brown palette, with its sharply defined shadows captured by Cézanne.

After we joined the A9 autoroute northbound, warning signs appeared: car on the side of the road. Then, A75 (a different autoroute) obligatory exit. I wasn’t sure what that meant. That the folks going on the A75, which starts around Béziers and heads to Paris, had to take a certain exit? We continued.

We came to realize that it meant the A9 was closed and all traffic was being detoured to the A75. No problem, I thought. We have a GPS!

We followed the other cars, winding around to the tollbooths. All but three were closed, so the lines were long. And they were swarming with gilets jaunes, or yellow vests. They made a big show of “guiding” cars through the piles of tires and pallets that were burning. The tarmac was a mess, having melted and been churned up by previous fires. Gendarmes stood, bouncing from one foot to another to keep warm in the drizzle, but not interfering. A huge tree in the center of the roundabout after the tollbooths was uprooted.

I’ve read unflattering comparisons between the gilets jaunes and the women’s march in Washington and Black Lives Matter protests. But the women’s march and BLM didn’t set things on fire or uproot trees. There might be bad actors attracted to any demonstration, ready for an excuse to wreak havoc. The folks at the autoroute exits didn’t seem like the casseurs who made a mess in Paris, even though it doesn’t seem like the casseurs were the ones who devastated the tollbooths. The yellow vests seemed intent on getting even with somebody, anybody, for attempts to wean them off their cars, which were parked on the side of the road and festooned with yellow–mostly SUVs. They made a big show of being gentil, kindly directing the traffic mess that they had created.

There’s an argument that the autoroutes were constructed with tax money, and so they should be free. The protesters don’t like that there’s a toll, and that it’s collected by a private company that maintains the autoroute (and also sends out vans to accident sites and cars that have broken down on the side of the road, etc.). For the most part, the autoroutes in France are as smooth as a baby’s bottom, and the speed limit is 130 kilometers an hour–80 mph. The argument is that the toll is higher than needed for maintenance, and anyway there shouldn’t be a toll at all. (For about 90 kilometers on Sunday, I paid €7.80; to cross France north-south costs about €60 in tolls.)

Of course, the militant drivers would not like it if the autoroutes were more crowded than they already are. Sometimes in summer, the A9, which hugs the Mediterranean coast from Spain up to Nîmes, before plunging into the center of France, is a long parking lot of cars from all over Europe, full of vacationers hoping to get to the beach before their cars overheat. Periodic suggestions for surge pricing further enrage people, though I’d be the first to drive at a weird time to have less traffic AND pay less. But having different prices is seen as undemocratic. The protesters have also destroyed roadside radars–every single one we passed was knocked down–because they ruin the fun of speeding.

Our brilliant (not) GPS (actually we used two–Waze and Maps–with identical results) advised us to go on, then had us double back at the first roundabout. “We’ll probably get on in the other direction,” my kid surmised. Nope. Cars were getting off the autoroute, but roaring fires kept anybody from getting on in any direction.

We finally got away again. We ignored the GPS and followed the signs to Agde, planning to take back roads up to Montpellier. But eventually it wasn’t so clear where to go. We listened to the GPS. Bad idea. We turned this way and that and ended up on another divided highway (with no way to make a U-turn) when we passed the same Cactus Park we’d seen half an hour earlier. Indeed, soon we were back at the burning barricades of the roundabout from hell.

My kid informed the GPS yet again that the autoroute was blocked (feedback is how they know about problems) and we tried yet again to find a detour. We went through some charming little towns, but you get no photos because my kid said it wouldn’t be fair to show them in the rain when they must be even prettier in the sun.

We eventually did make it to Montpellier, 2.5 hours late. The mall was a bust. It was just like any mall you would find in the U.S. except it was open to the sky. This usually would be a plus, but we were there on one of the few days a year of rain. Just nine days before Christmas, a few people hurried by. There were no lines for the changing rooms.

We ditched the idea of taking the tram to the city center and decided to just get home. Looking over the routes suggested by the GPS, we chose the detour on the A75, which hooked up with the A9 at a point beyond the disastrous barricades we’d encountered earlier.

We soon were climbing through hills on the outskirts of Montpellier. Disconcertingly, the signs told us we were going toward Millau (not on our way) and Clermont-Ferrand, which is just about in the center of France and much more of a detour than we’d bargained for. My car started beeping that we were almost out of gas, but we didn’t see a single service station.

The scenery was gorgeous, though, a different kind of rugged than what we were used to. And the church steeples were a different shape. It’s funny how you notice regional traits, like the way cousins might have the same nose.

My kid asked the GPS to take us to a gas station. That worked out well, and we got a pannetone as a gift (from Italian gas chain Agip).

The GPS led us back to the A9, with promises of Narbonne and home. This entry, too, had a long line of cars being filtered by yellow vests, and fires burning and destruction all around. A few minutes later, the skies opened and it poured as if to set sail to Noah’s ark. Good, I thought, that will send the yellow vests home. But on arrival at Carcassonne, they were huddled under the roof of the toll station, collecting the toll tickets, as if giving us a present for having destroyed the barriers and letting us pass for free. I handed mine over, but as I pulled away I yelled expletives at them, horrifying my kid. But it made me feel better.