Halloween–or as they say, ‘Alloween–has taken off in France. (I get teased about my accent, so turnabout is fair play.) The supermarkets have stands dedicated to candy, makeup and decorations.

The village holds a costume contest, and a high proportion of the residents participate in handing out treats, which are almost always not individually wrapped!!! I freaked out the first time, but I soon knew almost everybody. In fact, our kid chose a big container of not individually wrapped candies (licorice and fake fruit flavors) for us to distribute. I wanted to get mini Snickers, figuring that if there were leftovers, they might as well be something good. But my kid informed me that on Halloween, kids want candy, and chocolate isn’t candy, it’s chocolate and is for Christmas. Somehow it seems very French to elevate chocolate above mere candy status.

A perfect haunted house, in a deep, dark forest, too. (It was for sale. Probably still is.)

The French haven’t yet adopted yards full of inflatables, probably because front yards aren’t a thing here. Either you have a townhouse whose front door opens right onto the sidewalk or you have a “villa” (which includes quite modest free-standing houses) with a garden behind the privacy of a wall or at least a fence. None of those golf-course-like lawns stretching unimpeded between house and curb, unused except for holiday decorations.

In France, Halloween costumes are strictly scary. Save your astronaut and princess outfits for Carnivale on Mardi Gras. Our village is so small that it doesn’t take long for the kids to circulate in large groups. They bang on everybody’s doors, lights on or not. One time, before a house that was shuttered up tight, one of the parents hollered “Papi!” (Grandpa!) and a little old guy opened up and released a sweet into each proffered bag. The whole porch light signal doesn’t work the same way without porches.

After pillaging the village of sugar, the ghoulish kiddies traipse through the community center to have their loot weighed and costumes judged. Our kid won the costume contest one year (headless–it really turned heads), then raised the ante the next year with a zippered face, which was even more horrifying. We waited for the costume winners to be announced, but nothing happened. Then we realized the other kids had left. The lights got turned down, the music got turned up, and we were confronted with the horror of the village’s singles population, and soon-to-be singles population (I recognized a few too many married parents of the kid’s schoolmates, not with their spouses), checking each other out, and not for best costume. Most were already tipsy and you could see that Nov. 1 was going to be a day of regrets for more than a few of them. The kid was crushed the zipper face hadn’t won, but somewhat consoled that it appeared there were no prizes at all that year.

Since the kid got too old to trick-or-treat and is too young for the singles-and-swingers dance, Halloween means a trip to the haunted house, followed by a small party at home with scary movies. The haunted house operates year-round in la Cité of Carcassonne, run by the same people who have the “museum” of torture. 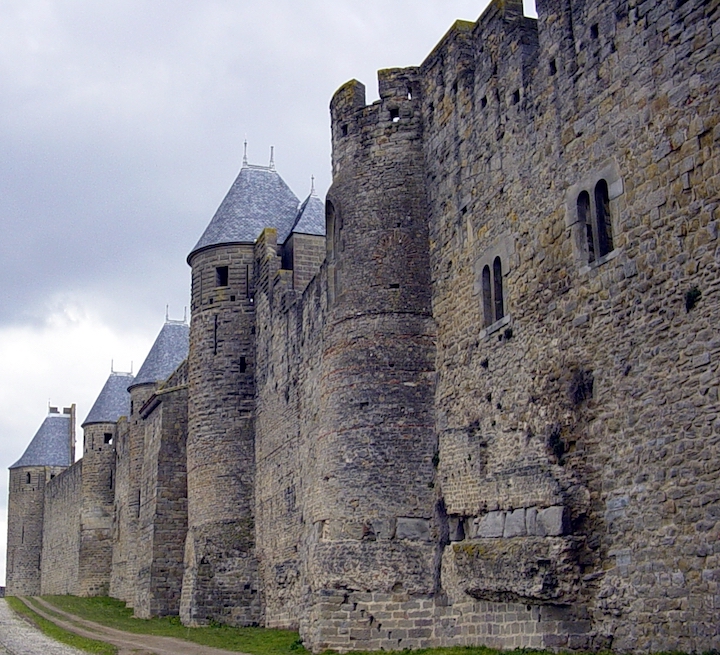 La Cité is definitely a good set for a scary movie. Gargoyles aplenty. Stern stone walls. Today promises to be bright and sunny, with not a cloud in the bluest sky, but when gray clouds hover low and the wind howls, you can imagine it as a haunt for ghosts. 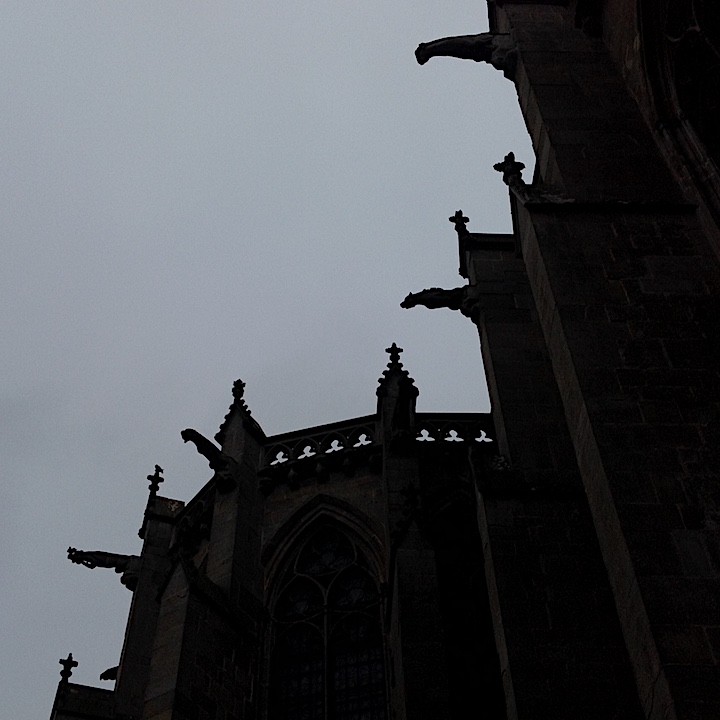 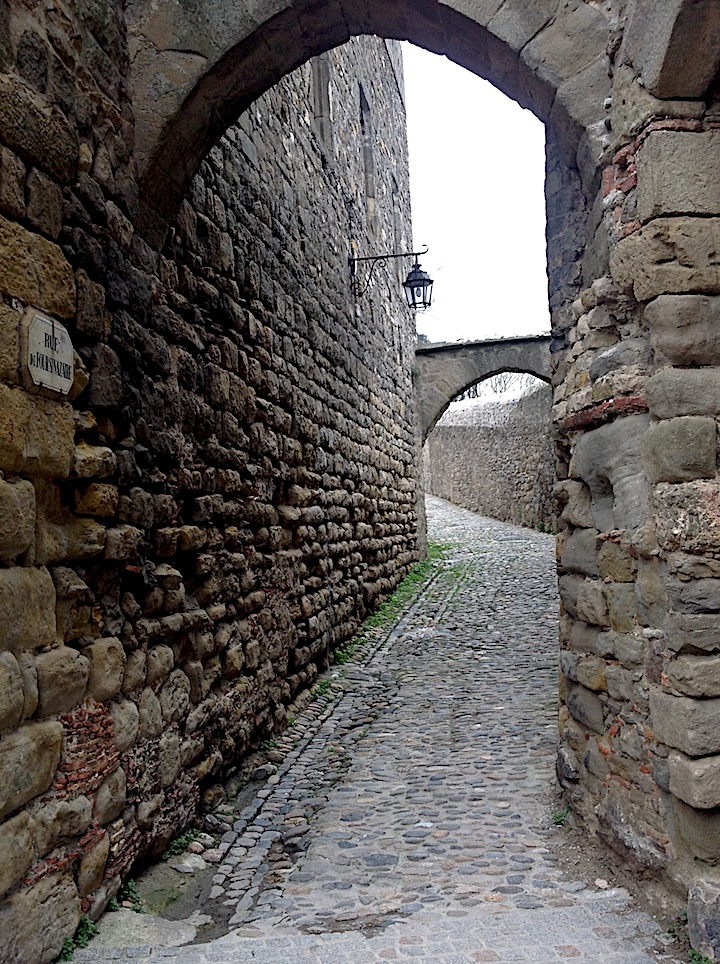 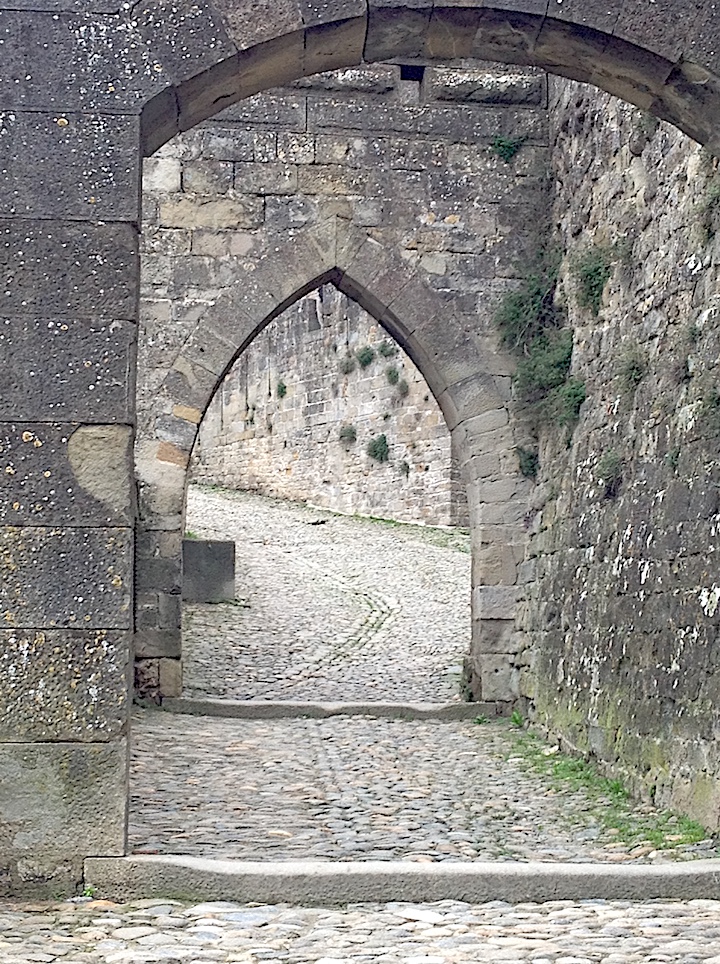 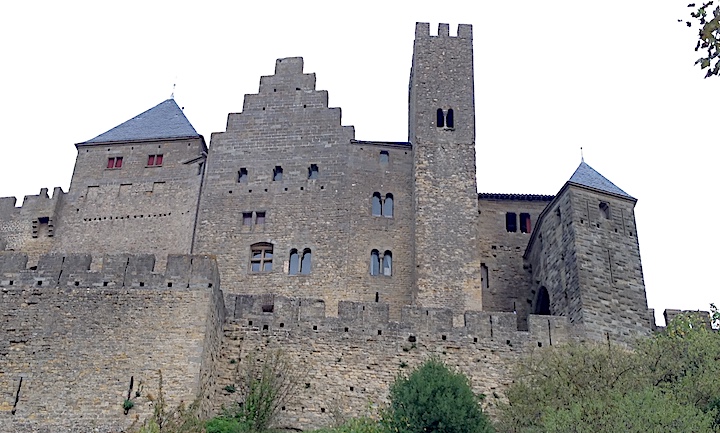 While the gang goes through the haunted house, I plan to visit the cemetery just outside the walls. I have gone to cemeteries in a number of towns in France, and something about them is so interesting. Again, no vast expanses of green lawns. They are real cities of the dead, with incredible chapels and tombs, a few engraved words conveying stories of the residents’ lives.

Our village cemetery draws a parade of people every day. Mostly they’re the little old ladies wobbling along to tend loved ones’ graves and say prayers. For the past two weeks, though, the cemetery has been a hive of activity, with cars parked along the perimeter as families tidy up and bring in big pots of flowers ahead of the real holiday, Nov. 1, All Saints Day–Toussaint. Chrysanthemums are the favorite, to the extent that putting them in your garden is just not done. I got a gentle reprimand when I put a pot of mums by our front door. Too bad–they’re such pretty flowers. 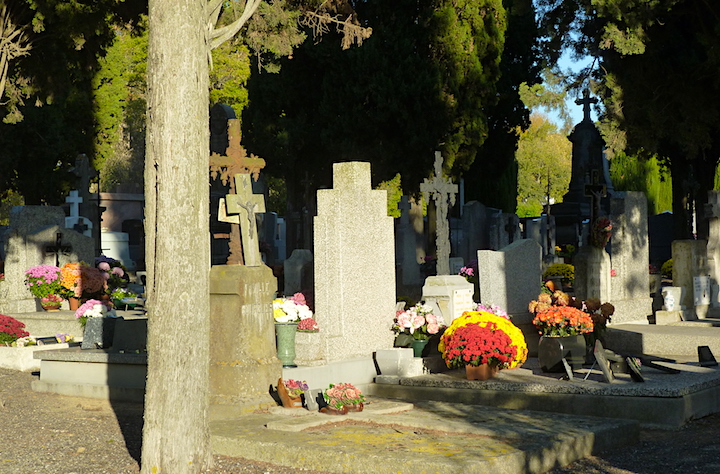 In Paris, the Père Lachaise cemetery draws visitors because of the famous people (Oscar Wilde, Edith Piaf, Jim Morrison) buried there. I went there on a Christmas Day years ago–it was one of the few things open on Christmas. And there were lots of people! The delightful podcast The Earful Tower had a segment about Jim Morrison’s grave. Another interesting one is the Montmartre cemetery. But even small cemeteries in small places are fascinating. They’re really proof that they are more for the living than for the dead.

And below, some random bits:

Re: Friday’s post about hunters and boars: here are some prints I came upon in a vineyard:

Tomatoes are still going strong in some gardens (photo taken two days ago):

And this was such a pretty scene, with the white horse and colorful vineyards: