Marseille is such an interesting city. New nestles against very, very old. Even in the rich areas, grit never feels far away. All kinds of art is everywhere.

I already knew to beware of cars with 13 license plates. The départements of France are numbered, in alphabetical order, so Aude, where I live, is 11, and the Bouches du Rhone, home to Marseille, is 13. Cars with 13 plates treat red lights as mild suggestions. Right of way goes to the biggest car or the driver with the steeliest nerves. Turning left from the right lane, in front of other cars, is normal. Any space big enough to fit the car is a legitimate parking place, even, say, a sidewalk. Turn signals on cars with 13 plates do not work except when they are in the left lane on the autoroute, blinking impatiently for cars ahead of them to move over so they can pass, pedal to the metal.

Driving in Marseille is thus a white-knuckle experience. But the city fathers have made much of the city center off-limits to vehicles. As a result, where it’s bad, it’s very, very bad, but where it’s pedestrian it’s wonderful. Except for the motorcycles and motorbikes, which do what they please. I was happy for the GPS to guide me to an underground parking garage, so I could relax a little. 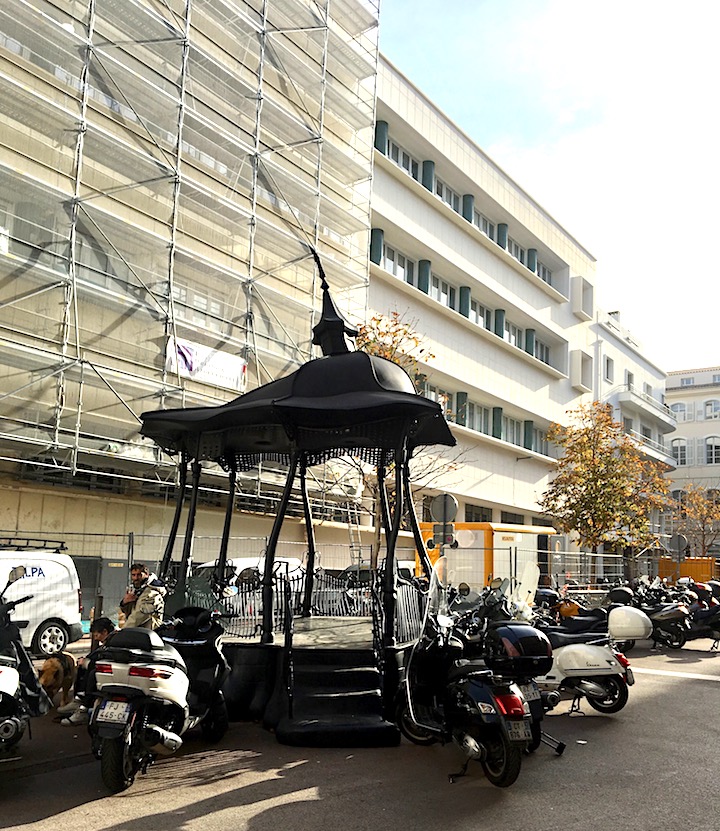 It was mid-December, but the weather was mild. A small Christmas market was next to the ferris wheel at the port, encircled by barriers and guarded by security officers who tried to strike a balance between stern and holiday-jolly. Fake firs flocked with fake snow juxtaposed with apartment balconies dripping with brilliant red geraniums, real. A few veiled women pushed strollers through the mostly deserted market, whose stalls were exclusively dedicated to provençal santons.

Marseille has a rich selection of the universal Instagram/Pinterest-driven all-female restaurants featuring vegan poke bowls and cafés roasting their own coffee served by burly men with beards and buns. Such places haven’t yet turned up in Carcassonne, so it was fun to try them out. Brooklyn is everywhere but in France most profonde.

I’ve wanted to see Mucem since it opened in 2013. The Museum of European and Mediterranean Civilizations incorporates part of the 17th century Fort Saint-Jean, with a very cool cube designed by Roland Carta next to it. The cube looks like it’s made of laser-cut paper doilies, but it’s actually fiber-reinforced concrete.

The outdoor spaces at Mucem are open to the public for free. Clean, quiet, beautiful. I was surprised there weren’t throngs of people, especially on a mild December afternoon. If I lived in Marseille, I would get nothing done because I would spend all my time on a chaise longue, admiring the vista and watching people. 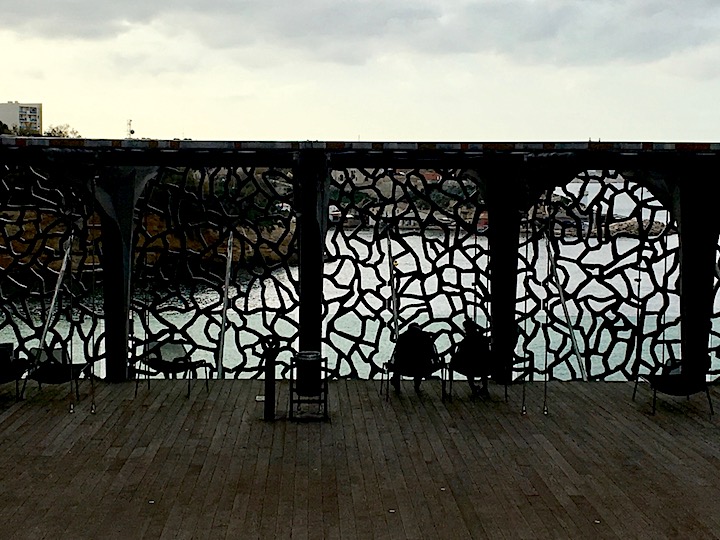 Mucem had these exhibits: a collection of toys made in Marseille between the end of the 19th century and the late 1970s; an exhibition on Afghanistan, including one of the blue burqas that imprison women there, its yards of knife-pleated fabric going round and round, and many multi-media installations; an abécédaire, or A-to-Z, on the theme of luck and chance; and a retrospective on Jean Giono, whom I’d never heard of but who was a noted novelist whose experiences in World War I made him a pacifist to the point of being accused of collaborating with the Nazis in World War II. There was another exhibit, very surreal, with famous paintings remade as, say, a puzzle or a refrigerator door, and books whose titles twisted the those of the classics. It was fun to spot the jokes.

The old fort was amazing to see up close. As Marseille goes, it isn’t very old–the oldest bits of the fort go back to the 1100s. By contrast, the city was founded by the Greeks around 600 BCE, though there are traces of human habitation well before that.

Afterward, I strolled through the neighborhood called le Panier, or the Basket, the oldest part of town, settled by the intrepid Greeks.

Going back toward the ferris wheel, the architecture was a feast for the eyes, an open-air museum of sculpture.

30 thoughts on “A Day in Marseille”