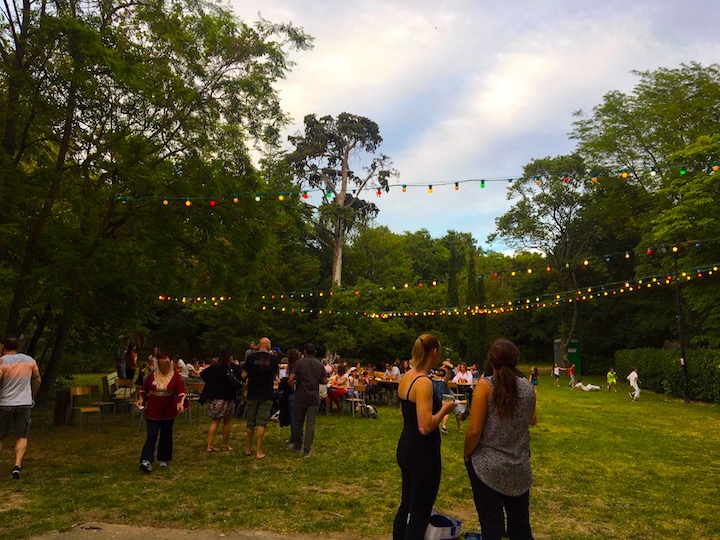 Little French villages are special in a general way, with their beautiful stone houses and flowers and fountains, and they each have something unique, too. Recently, one of the little villages around here put on the most astonishing performance. Young mixed with old and creativity flowed in a way that almost brought tears to my eyes.

It was a moving performance in all senses of the term. Yes, there were emotional moments, but the scenes were scattered around the village, and the spectators walked from one to another.

It started at the football (soccer) field. A couple of children kicked a ball, then a flood of kids invaded the field, all while music played on loudspeakers. Then referees–adults–ran in and kicked the ball just to each other as the kids surged from one to another of the refs. A loud boom send the players all to the ground. Sirens started, and some guys dressed in white ran onto the field with a stretcher. They loaded up one of the refs, who seemed to have a ball under his shirt. Then the kids all ran off and the audience moved on…not having the slightest clue.

We climbed one of those passageways you find in old villages, made by and for pedestrians centuries ago. Dancers writhed against the walls. Then we came out at a space where a grange or garage or house had been torn down, leaving a gap like a lost tooth in the otherwise complete row of attached stone houses. It was set up like an operating room. 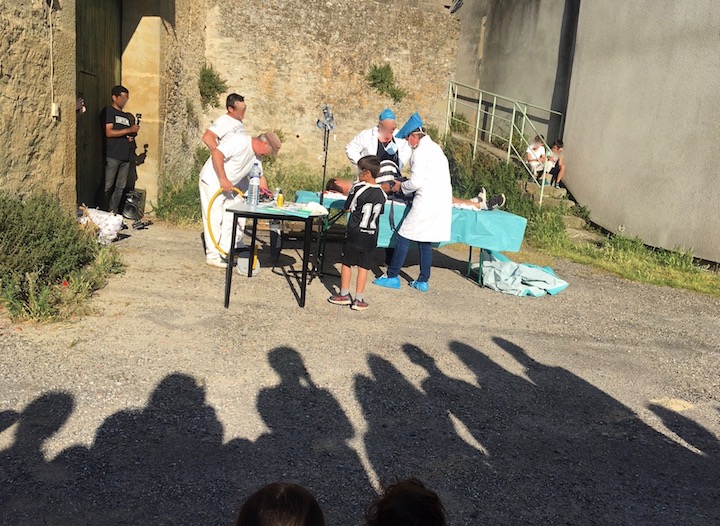 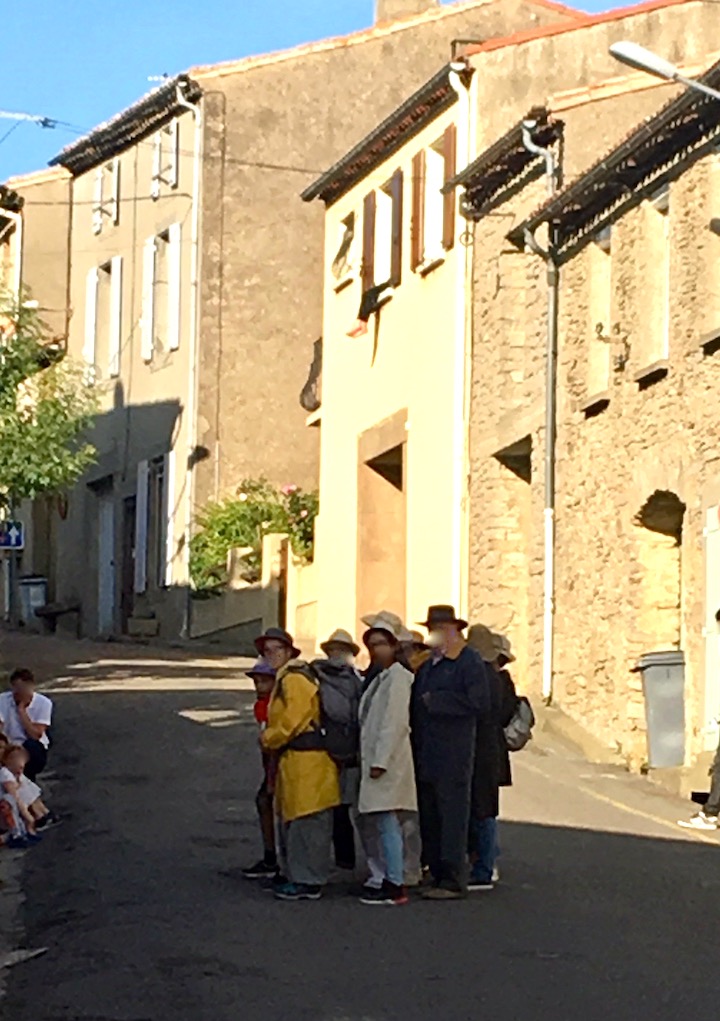 In the middle of a street, a bunch of residents, wearing long work cloaks that blue-collar workers used to wear here (one of my kid’s teachers, an older guy, would don a cloak while teaching). They were in a huddle and scooted up and down and back and forth along the street as small children ran to a wall and picked off messages that were tacked there, handing the messages to people in the audience.

We migrated up the street, where a big pot of artificial flowers was in front of a house. A very tiny, very ancient lady stood in the doorway, laughing that so many people were behaving so strangely in this little village. Children came and plucked the flowers, handing some to her and some to the audience. Across the street, somebody’s legs dangled and kicked out of an upper-story window. 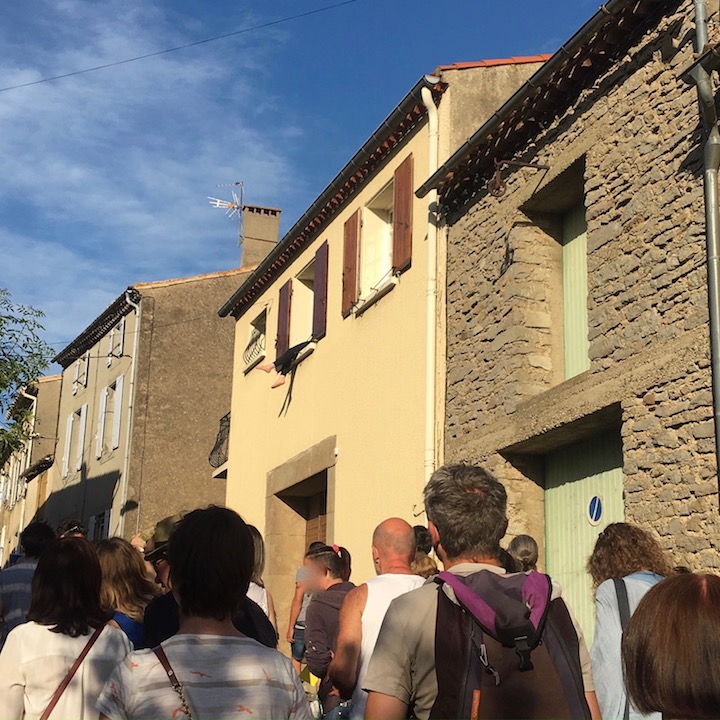 As we climbed the narrow street, sweet notes of a cello slipped out of an acoustically lovely old stone garage, played by a very handsome young man, maybe late teens or early 20s. Everybody held their breath as he let the music float out to embrace us. It was magical. 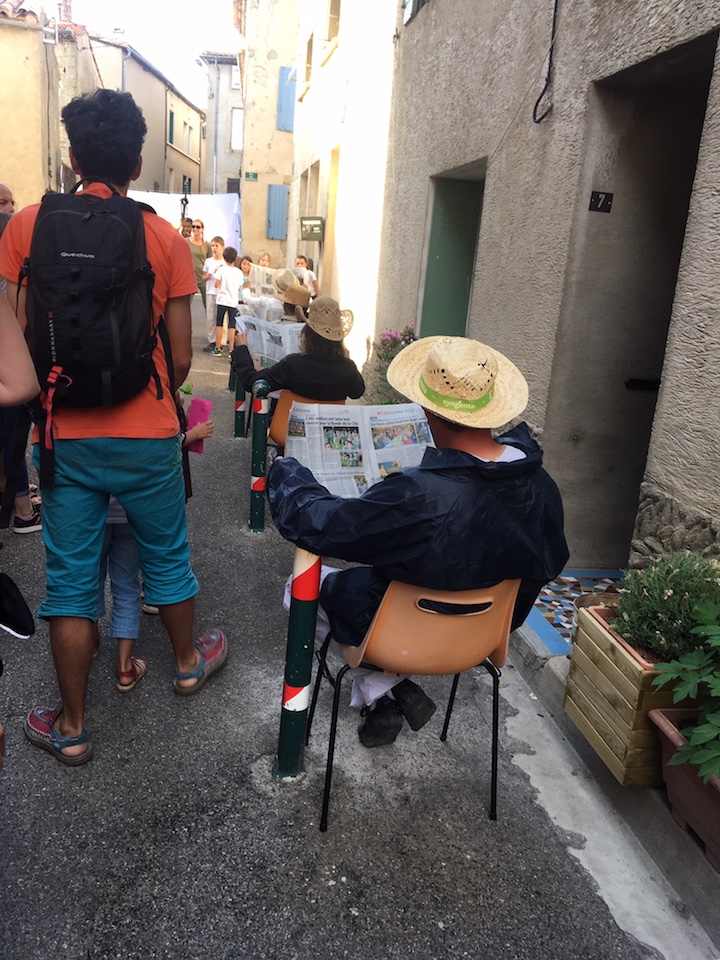 Around the corner, some people wearing rain coats and hats were seated in a line of chairs, reading the newspaper, as if they were on a train. They took turns reading random headlines out loud, like some kind of Dada poetry slam.

Adding to the train impression was a big white sheet stretched across the street (which was only barely wide enough for a person to lie down in cross-wise). Some bright lights blared at us from behind the sheet, almost like a train coming through a tunnel. We advanced to the sheet, and then music started. Dancers were behind the sheet, casting shadows on it. It got silly and funny and was all improvised. 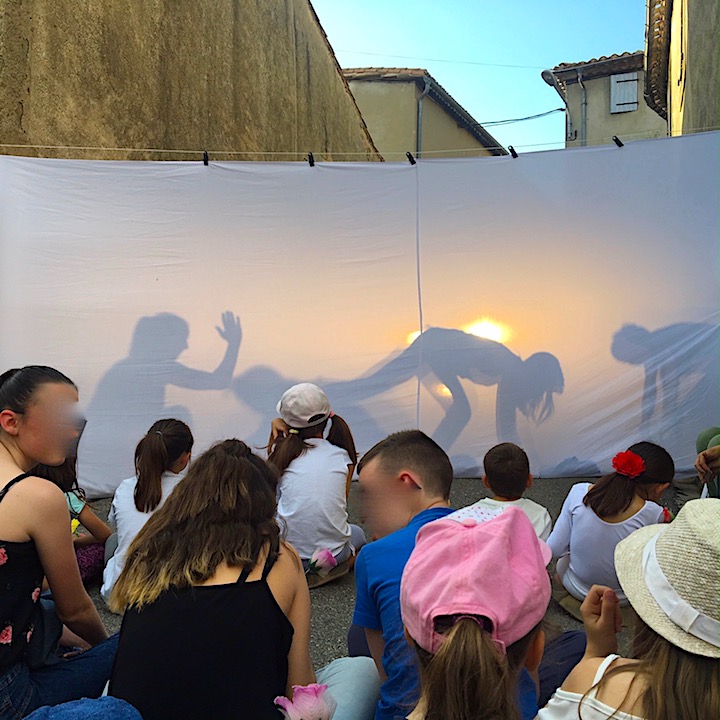 We moved to a village square, where some older residents and young girls playing cards around a big table. They were clearly cheating, getting more and more outrageous. The girls crawled under the table and walked on top of it, throwing cards. All this was to music. Finally the cards got more maniacally tossed in the air, a boom rang out and we were off to the next thing.

The nurse and surgeon were back, this time with an improvised tale that was completely nonsensical, with lots of double-entendres and puns that would be way too complicated to explain in translation. Between the slapstick and the coy jokes, young and old were cracking up. 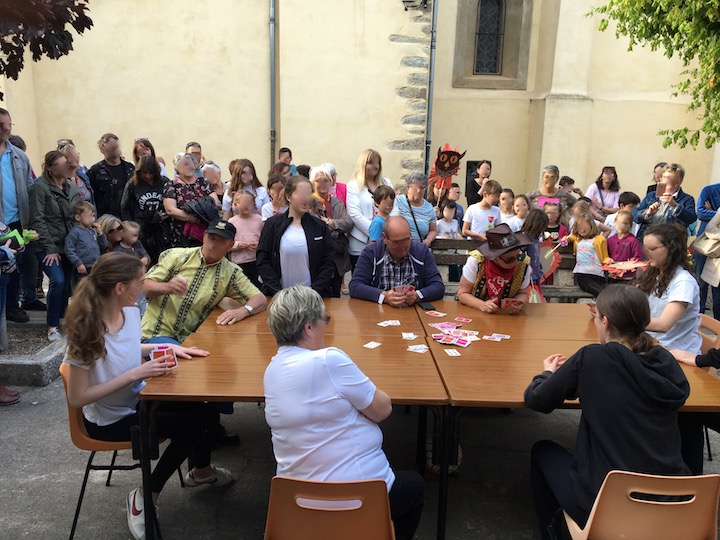 Under the trees in a cool spot by the park, a young woman perched on a stool. She exuded calm and poise. She had two instruments, a large drum filled with pebbles, and a finger harp. She asked us to close our eyes, and she took us to the sea. She spoke about the beauty of the sea, the importance of the sea, while the waves swirled audibly around us. She added a few notes from the harp, which seemed to me to be in my ears what the sun does when it glints off the water. Again, everyone held their breath. Mesmerized.

In the park, a final scene brought all the cast, starting with dancers who scampered among the trees. An adult in a rabbit costume walked a tightrope stretched between two trees. Every talent had a place! The football players arrived, and finally everybody took a bow. 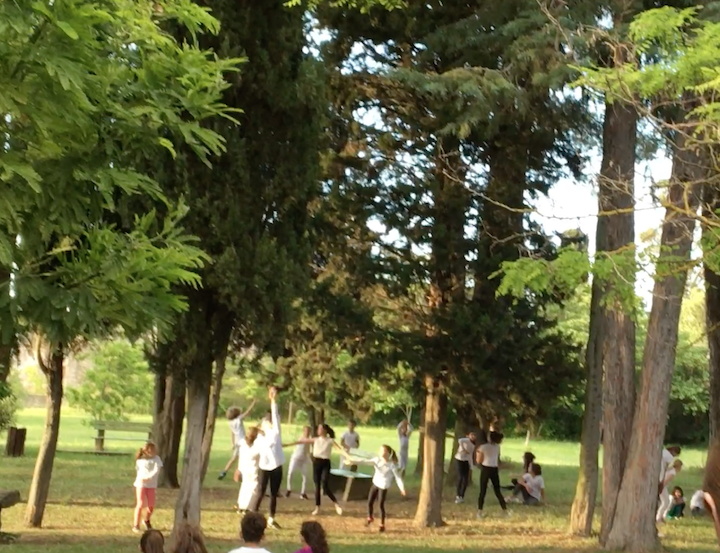 Two food trucks were in the park, and tables were set up for the shared moment to continue.

Have you ever seen such a thing? I was so impressed by the wide variety of people who participated and the many talents of such a little village. If anything, it was a bit like Dr. Seuss’s Whoville, and after this special night, the village’s heart got even bigger. 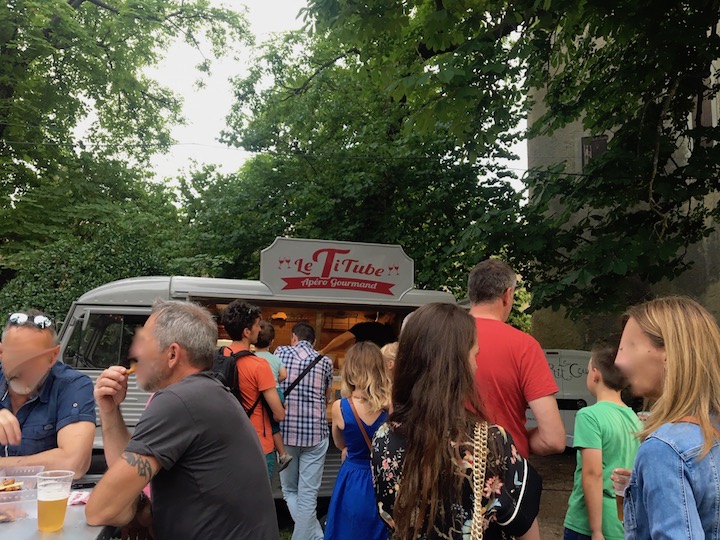 I don’t have the kind of WordPress account to allow for videos, so I’ll try to put some clips on Instagram. A couple of the acts I have only videos of–the cellist and the wave-maker.