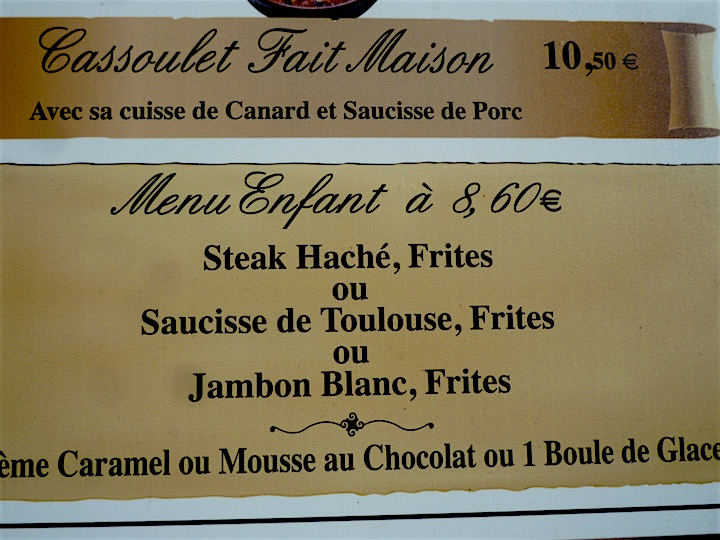 As a parent, I’ve been there and done that as far as sight-seeing and eating out with kids in France. Here are some tips, mainly for eating out with kids. Restaurants seem to be the most-fraught moment in many travelers’ trips to France, what with the different customs and language barriers (especially when menus use terms that are clever but not very clear about what will be on your plate). This is a repost, because today is C.R.A.Z.Y.

It’s fairly rare to see children at fine restaurants in France. It isn’t that the French don’t love kids–they have a higher fertility rate than other developed countries (1.98 kids per woman in France, compared with 1.91 in the U.K. and 1.86 in the U.S.). and government policies around maternity leave, job protection and pay are strong (I don’t want to say “generous,” because that sounds as if it isn’t deserved, when in fact it’s earned).

All the same, kids and adults occupy distinct realms in France. And to have the best experience possible while traveling with kids, it’s good to know the cultural expectations (you can always flout these–it’s a free country–but you will be subject to Gallic scowls).

Dinner is late in France. Most people I know eat between 7 and 8 p.m. at home (BTW, the French use the 24-hour clock, so it would be 19h (h for heure) and 20h). But it’s rare to find a restaurant open at 7. Most start service at 8. When toddlers need 12-14 hours a night and even preteens need 9-11 hours, it’s logical that they are in bed around 8 p.m. The French deal with this by leaving the kids at home with a babysitter.

The other challenge is the French expectation that dinner should be enjoyed slowly. It is difficult to enjoy dinner when you have a ticking time bomb of a toddler sharing your table. We would target one of the few restaurants that opens at 7, La Grande Bouffe, which suited the Carnivore just fine, as it specializes in large slabs of red meat cooked (well, quickly passed near) a wood fire right there in the dining room. We would get there the minute it opened and order quickly, lest a big table arrive and overwhelm the one-man kitchen.

Our child would sit angelically for an hour, which seemed like quite a feat for a one- or two-year-old, but after that, all bets were off. First fussing, then increasingly emphatic demands to get DOWN. However, even in family restaurants, kids don’t wander the way they do in the U.S. Restaurants do not provide crayons and special paper placements for coloring. Bring your own. Also a sippy cup, because they also don’t have plastic glasses, and you can’t enjoy your meal if you are trying to keep your kid from dropping or knocking over a glass glass. A stroller is a good option (if there’s room–some restaurants are tiny), because they can go to sleep.

There are options, such as brasseries, with wider hours. Informal family restaurants–mostly chains like Hippopotamus or Buffalo Grill–open early and have reliably OK food but do you really want to spend your meals in France in the equivalent of Applebees? (I like Applebees well enough but I wouldn’t cross the ocean to eat at one.) One Parisian restaurant that’s quite loud–in a raucous, not discotheque way–is Nos Ancêtres Les Gaulois, a medieval-style place where the servers, dressed in period costumes, stab your knife into the table. It is not gastronomic, but pretty fun, a bit like our medieval meal last summer.

Nice restaurants in France are quiet. In the U.S., the louder the better, but that doesn’t hold here. Everybody speaks in a whisper. That means you have no cover or plausible deniability when your kid shrieks. And nicer restaurants rarely have children’s menus or high chairs (and forget about changing tables!).

If you don’t want to go downmarket to family-focused restaurants, consider nice restaurants with outdoor seating, where the ambient noise level is higher. The catch is that all the smokers want to sit outdoors, but you might be able to score a spot upwind or with nonsmokers around.

Another option is to shift your schedule and eat your “nice” meal or main meal at lunch. The expectations for calm are somewhat less strict at lunch, plus the menu usually is cheaper–double win.

If a place doesn’t have a kid’s menu, they sometimes will offer the same menu as for adults, with half portions at half the price. One of our favorite restaurants in Carcassonne, Le Clos des Framboisiers, does the half-size, half-price option. Our favorite Chinese restaurant, La Jonque, suggested a stir-fry of chicken and vegetables with rice–not on the menu, but it was a big hit with our kid.

Some years later, our kid asked to have a birthday sleepover with two friends, with dinner at La Jonque–ALONE. So I called and reserved two tables, specifying that they should be as far apart as possible in such a small place. The chef and his wife have kids, and understood. We arrived all together, then split into opposite corners of the dining room. Another family with kids about the same age were there, and those kids stared wide-eyed with naked jealousy as ours ordered on their own and seemed to have a great time at their very own table.

If you have decided your main “nice” meal is lunch, then you can have something simple or even get takeout for dinner. This is one of the best arguments for renting an apartment, where you can feed your kids, put them to bed, then relax with a glass of wine. I am not one of the people who will put a child to sleep in a hotel room and then go down to the lounge in the lobby. But it’s no fun (been there, done that) to sit IN the hotel room in the dark while your kid sleeps for 12 straight hours. A separate bedroom lets them get the sleep they need (a tired kid is a cranky kid), while letting you look over plans for the next day or just zone out in front of the TV.

I have found that an essential element to good behavior in children is to use up their energy. France has great parks and playgrounds. The lovely Place des Vosges in Paris has a big playground, full of beautifully dressed kids (wearing artfully tied scarves) being watched by their chicly dressed parents. Our kid’s eagle eye would detect playgrounds from a mile away. “Maison!” I would strain to pick it out, and sure enough, on the corner of a public square otherwise filled with café tables, there was a playground with a little house on stilts and a slide coming out. Just watch out for the “Pelouse interdit”–keep off the grass–signs and stick to the actual playground.

In Paris, in the basement of the Louvre, there’s a shopping gallery, and at one end, there’s a big empty space where you can see excavations of the ancient foundations. Almost nobody goes there (“What’s this?” “Old stones.” “Cool. OK, what’s next?”). This is the perfect place for some little ones to run and scream their heads off before dinner. It’s especially good on rainy days when they can’t run and scream outside; one of the few indoor places where outdoor voices are OK. Even if you’ve been hoofing around sight-seeing, your toddler has probably been strapped into a stroller and is dying to move.

With a little planning, your kid can have fun, you can relax and people around you won’t be annoyed.

21 thoughts on “Kid-Friendly Travel in France”