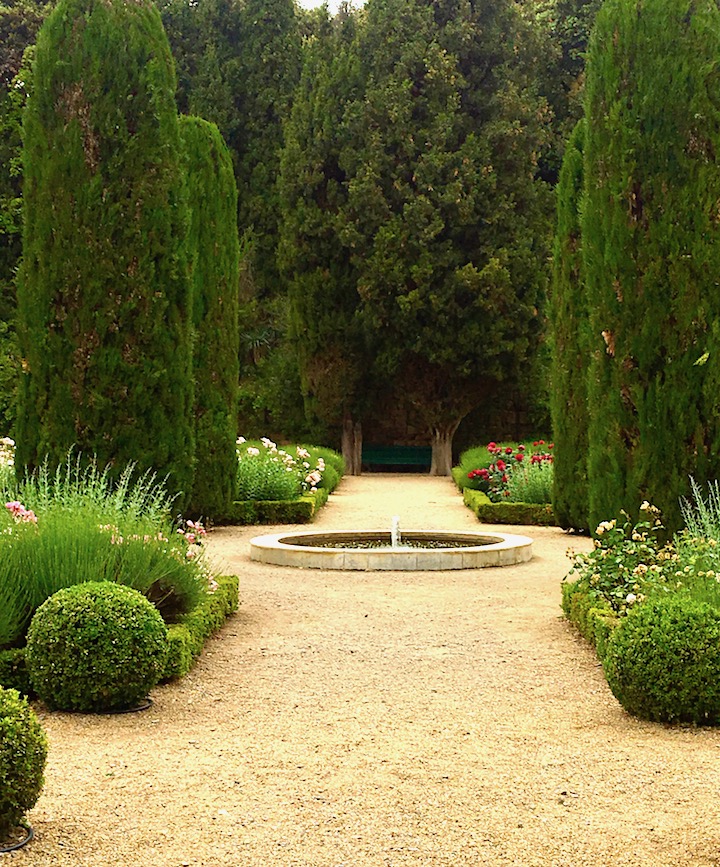 In a place that’s a thousand years old, gardens that date to the 1500s are relatively modern. Or are they timeless? Certainly they are a place without time, where the minutes seem to stop ticking by, replaced by the rhythmic crunch of one’s footsteps on gravel or dry leaves. 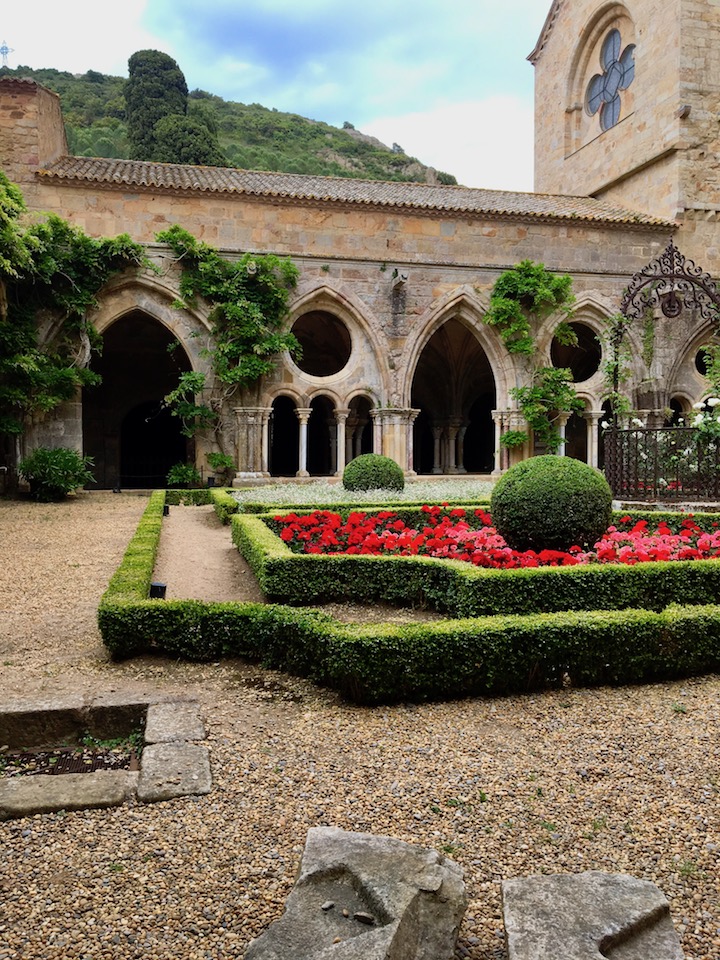 I haven’t been to the Abbaye de Fontfroide (Coldspring Abbey) for years, and the previous time was with my mother-in-law, who wasn’t up for any climbing or hiking. With that in mind, on a recent return I stupidly wore sandals, remembering the abbey as a classy kind of place. What a mistake. We took the “short,” 45-minute walk through the surrounding countryside (there’s a shorter climb to the hilltop cross, but it also takes 45 minutes, and then there’s a longer trail through the abbey’s vineyards). The path was mostly flat, but rocky and uneven, and my feet slid around in my sandals. I was so focused on trying not to break them and wind up barefoot far from the car that I didn’t really get into the moment. There are few things I love more than a hike in the garrigue, but usually I get the footwear right. 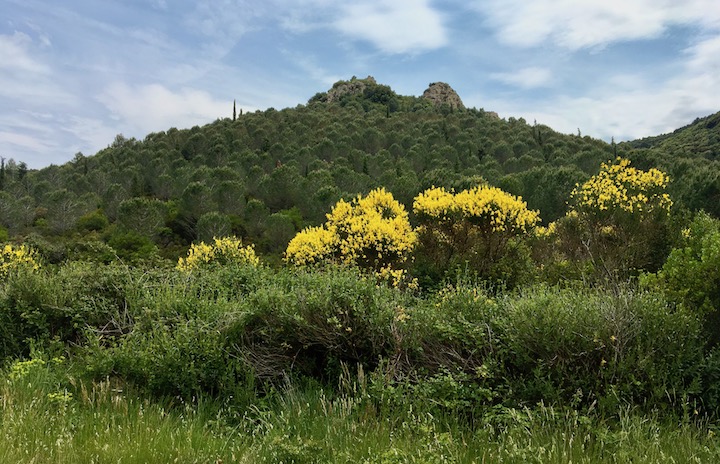 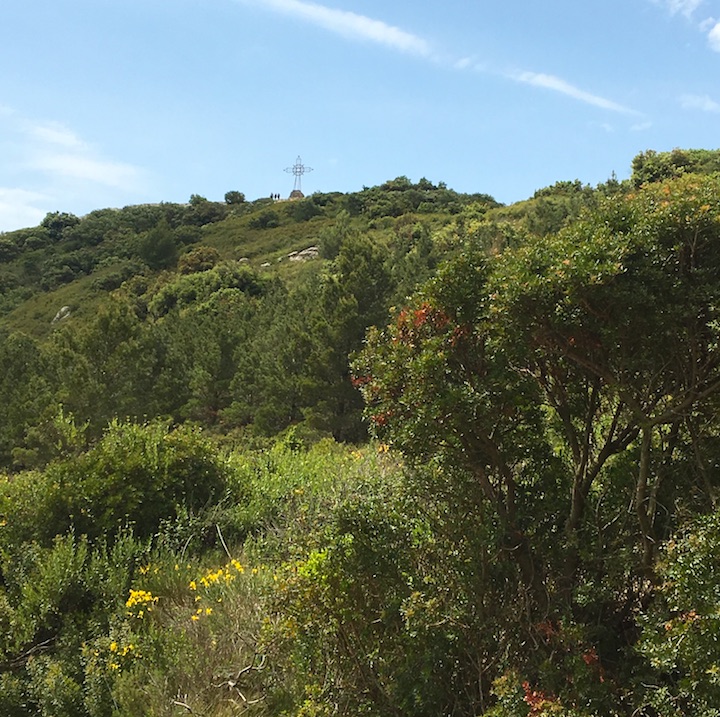 We were alone on the trail but the breeze carried the chatter of those who had climbed to the cross was carried across the valley until we rounded the hill and heard nothing but birds. This landscape must be nearly the same as when the abbey was founded in 1093.

The abbey sits in the heart of a nature reserve, and in the windy dry summers, when wild fires can rampage through, the hiking trails are sometimes closed. In fact, a fire destroyed 2,000 hectares around the abbey in 1986. Smoking is forbidden on the paths–get that! In France! But fires are serious business around here. They also don’t allow dogs–there are kennels for them at the entrance. 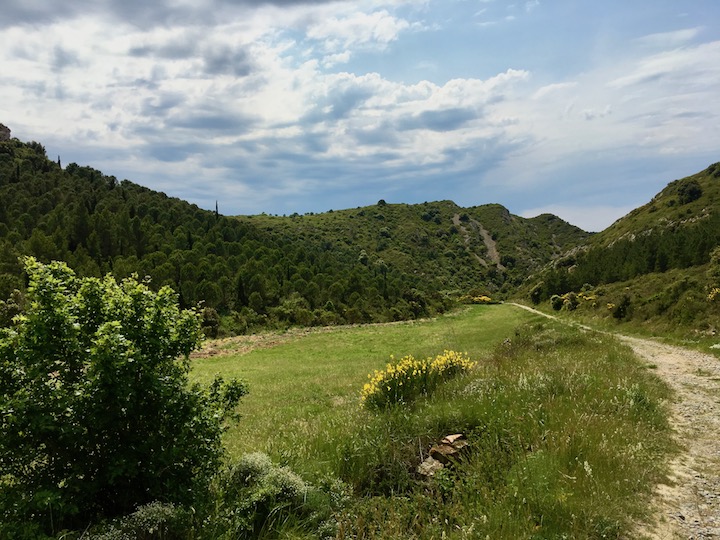 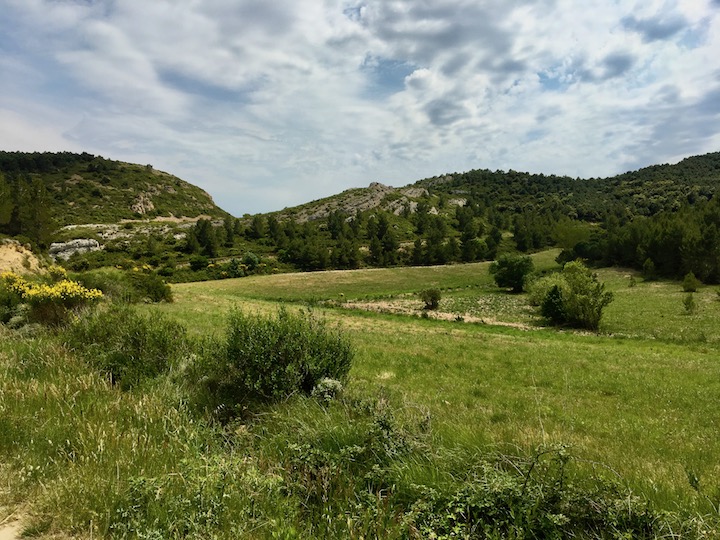 Even after culling photos, I have too many for one post, so the abbey itself will come next time. It’s different from the Abbaye de Saint-Hilaire, yet similar. You’ll see. 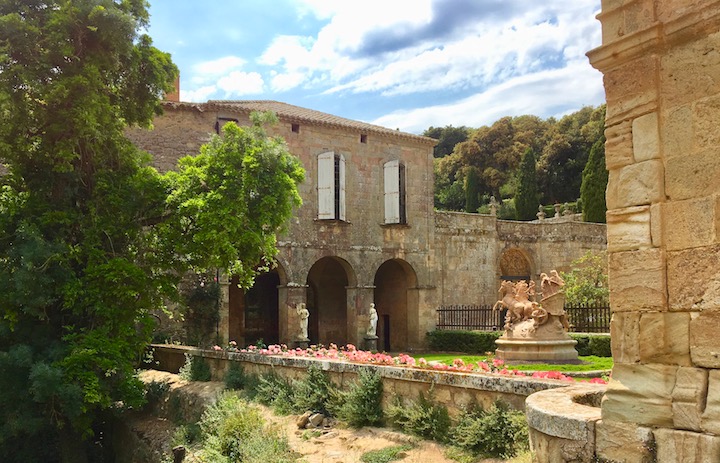 This post will be about the outside. The abbey has a hectare of terraced gardens that were created in the 16th century and a rose garden with nearly 2,500 rose bushes, including a variety of rose named for the abbey. 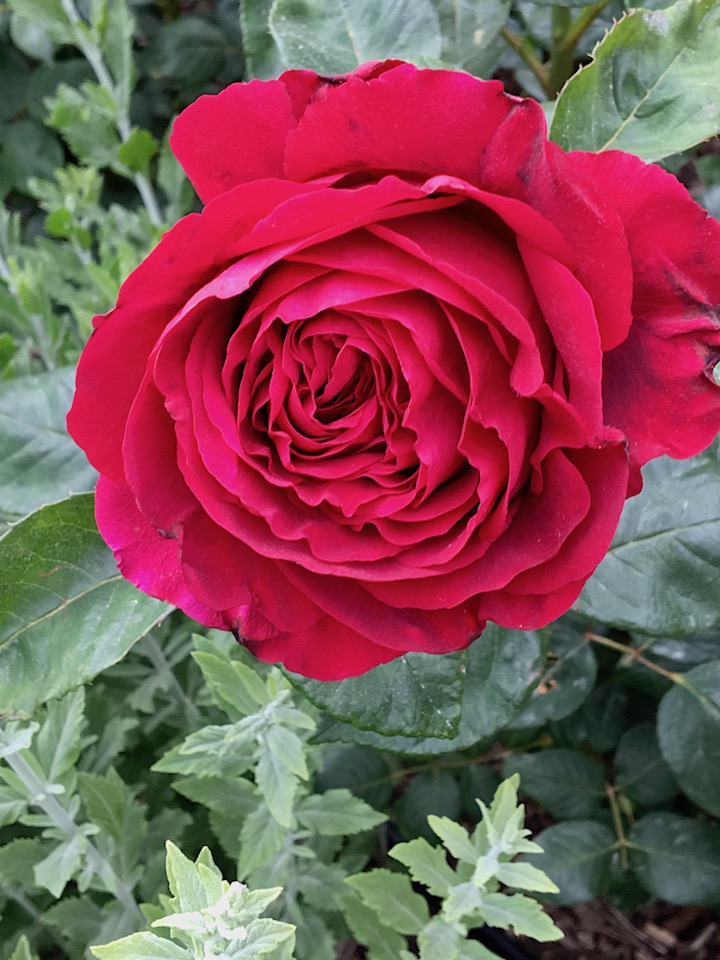 Each garden is different. In the cloister, wisteria–no longer blooming–climb the walls. The central fountain is framed by classic parterres. Two basins are for the “mandatum,” or ritual washing of the monks’ feet every Saturday. 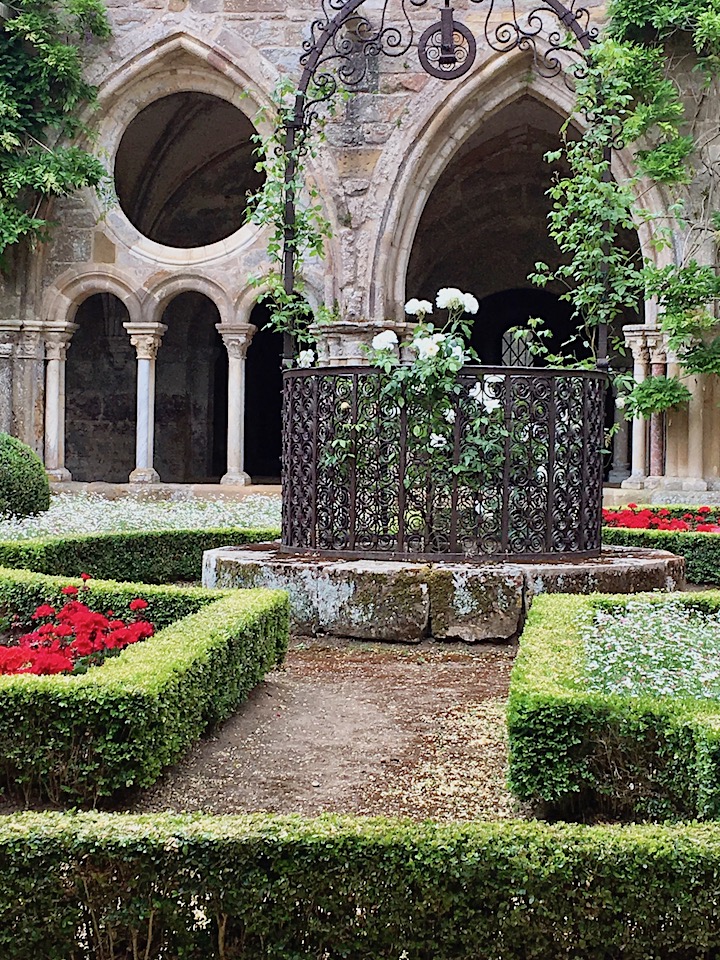 The cloister provided a covered passageway between the church and the kitchen, refectory and scriptorium, a place to walk, meditate and read. Think of the luxury of that–reading. It’s relatively recently that almost everybody learns to read. Back in the day, it was reserved for elites. 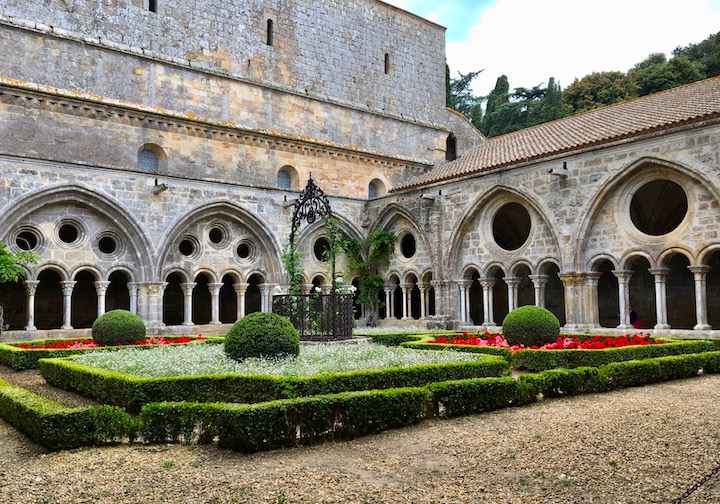 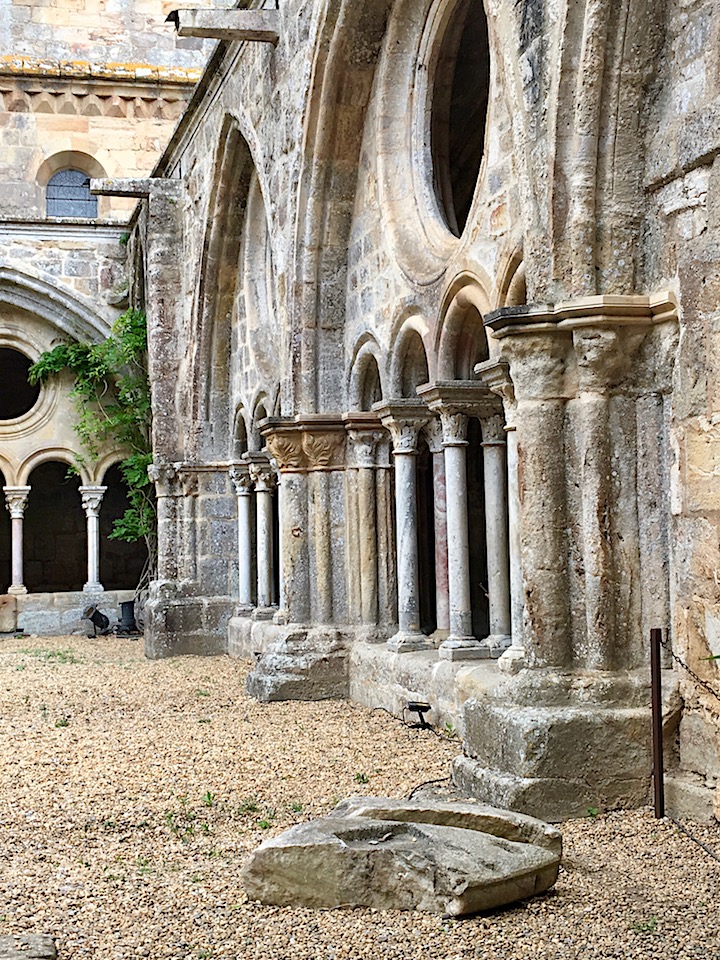 The rose garden had been planted with roses and with wild flowering plants over the former cemetery of the monks. Since 2008, the abbey has stopped using any chemical treatments in the gardens. I would love to know what they do because my roses are being gobbled up by something. We saw compost bins and insect hotels discreetly tucked into corners of the different gardens. 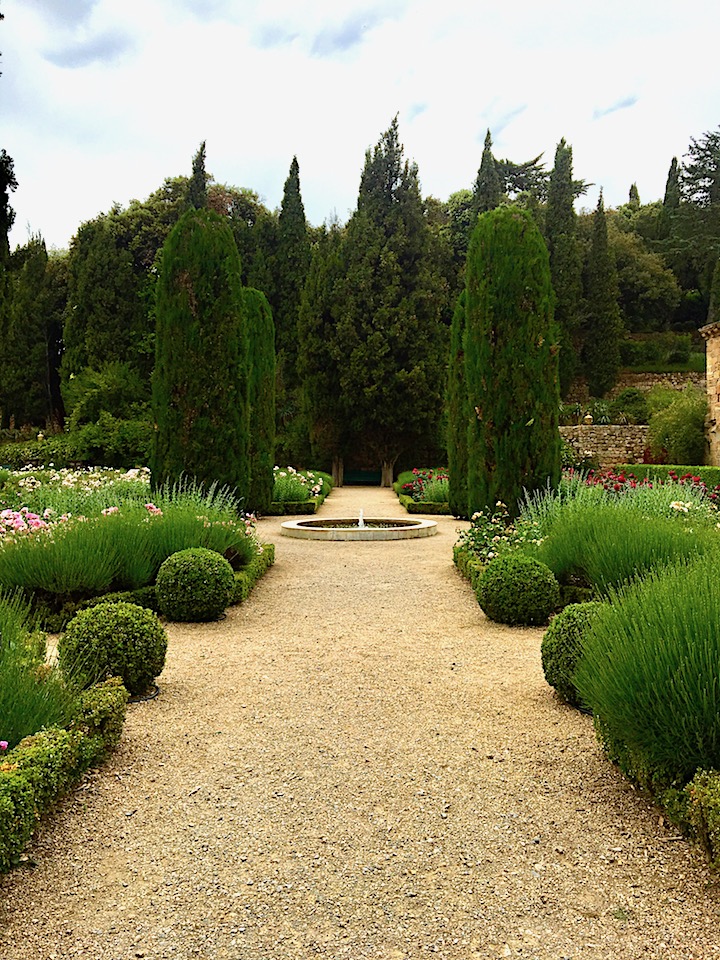 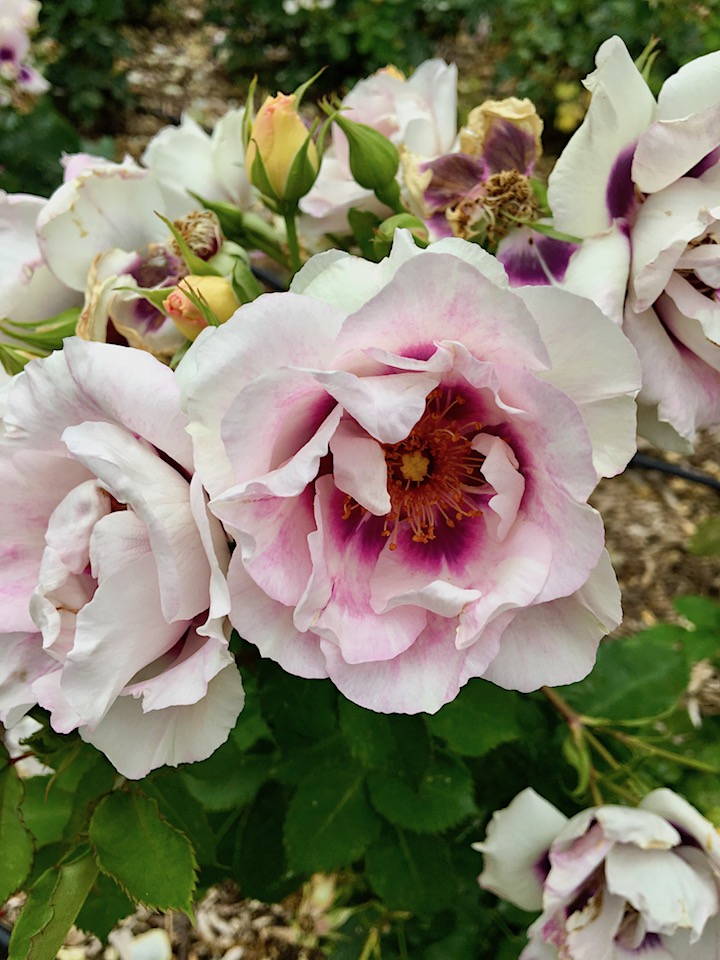 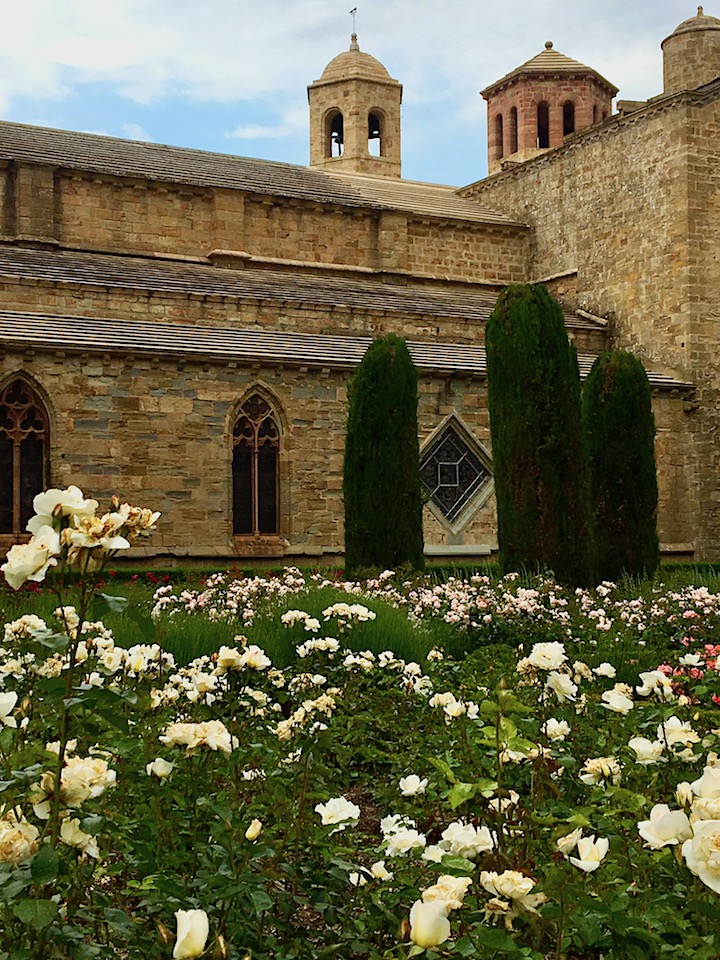 I didn’t capture as many photos of the terraced “Italian” gardens. They climb the hill that the abbey hugs, offering sweeping views, almost like going up in a glass elevator. The terraces feel like individual rooms–in fact, they were created as refuges for introspection. The first terraces were designed by Constance de Frégose, whose son would become the head abbot. Over the centuries, more were added. As one does over the centuries. 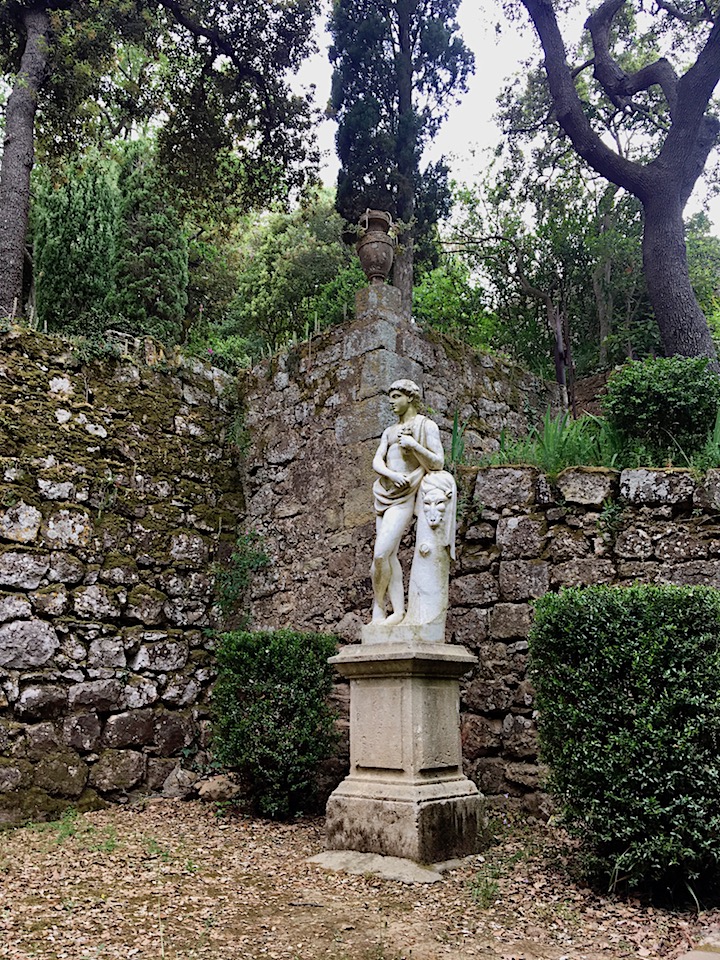 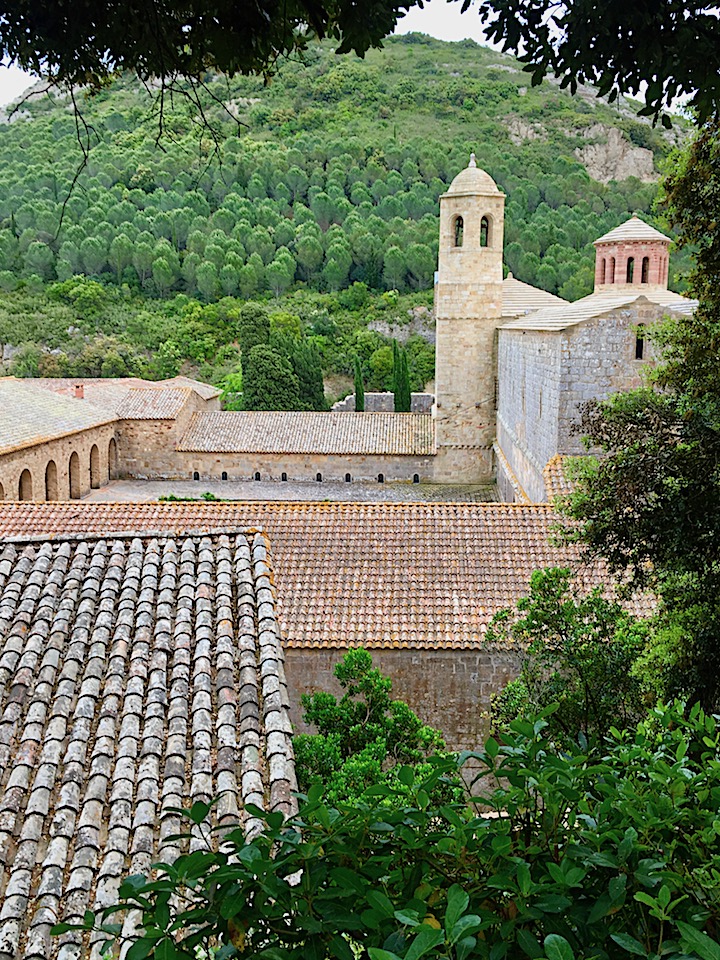 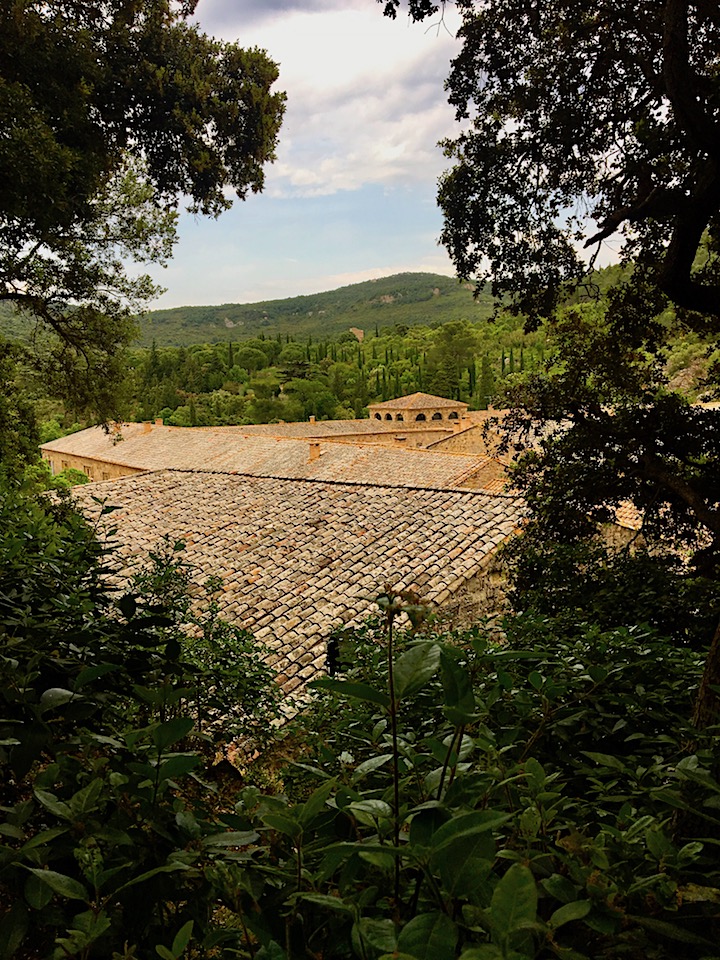 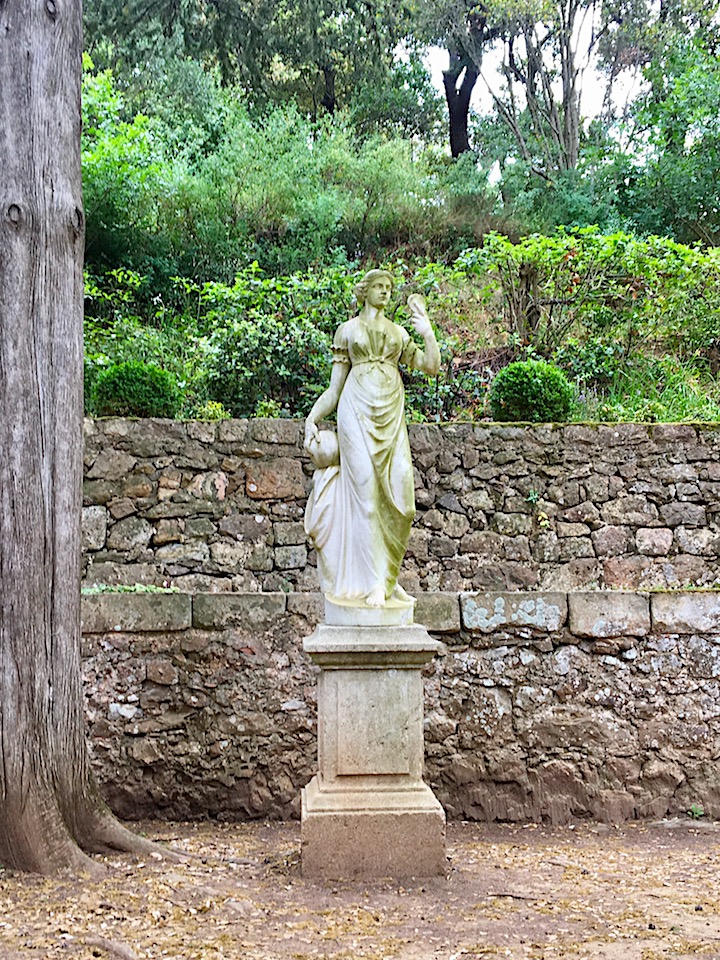 Do you garden? Do you enjoy it? My grandmother had a green thumb. She had an enormous vegetable garden that produced enormous zucchinis and enormous tomatoes and so many other things. Not a weed to be found. She worked on it every single morning and evening. She also had flowers everywhere. I was taken by the fragrant peonies. There were bright poppies, which might have been planted by her or by her in-laws (who lived next door…can you imagine!) to remind them of the vast red fields of poppies in the Europe they had left behind. The poppies once led to an investigation by the police, who figured out fast that this granny wasn’t running a homegrown heroin operation. She thought they were nuts, and she was right. Knowing my grandma, she would have stuffed them with baked goods. 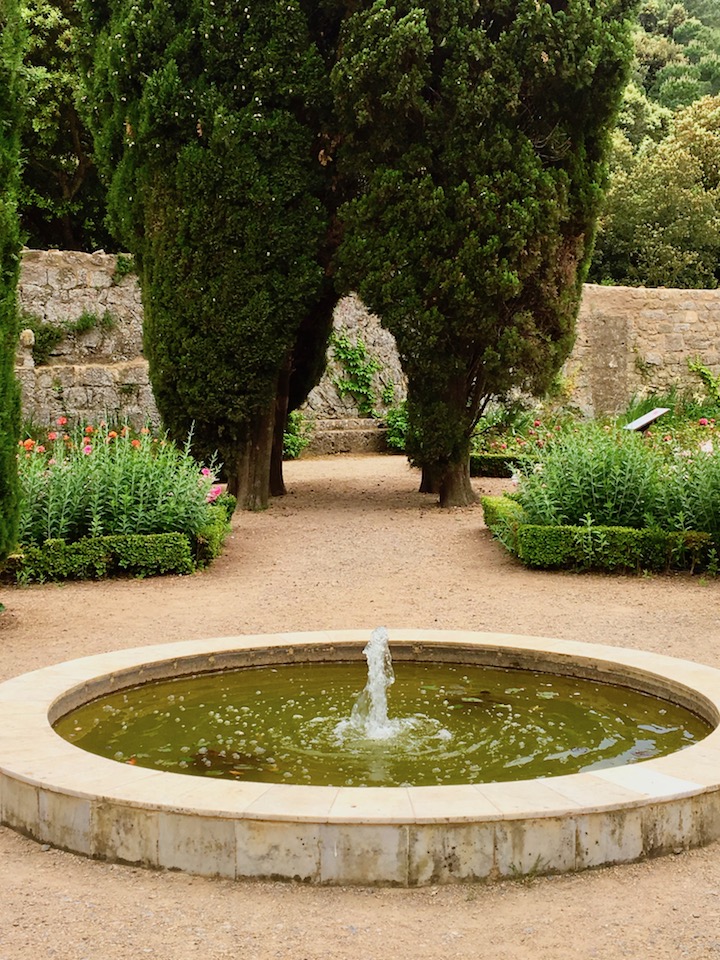 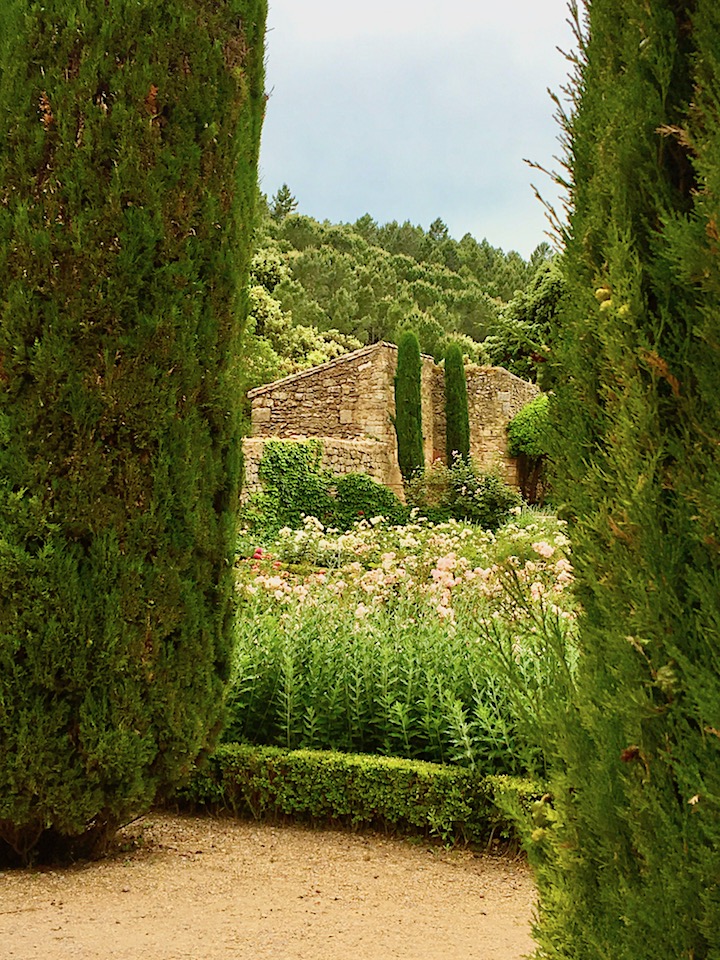 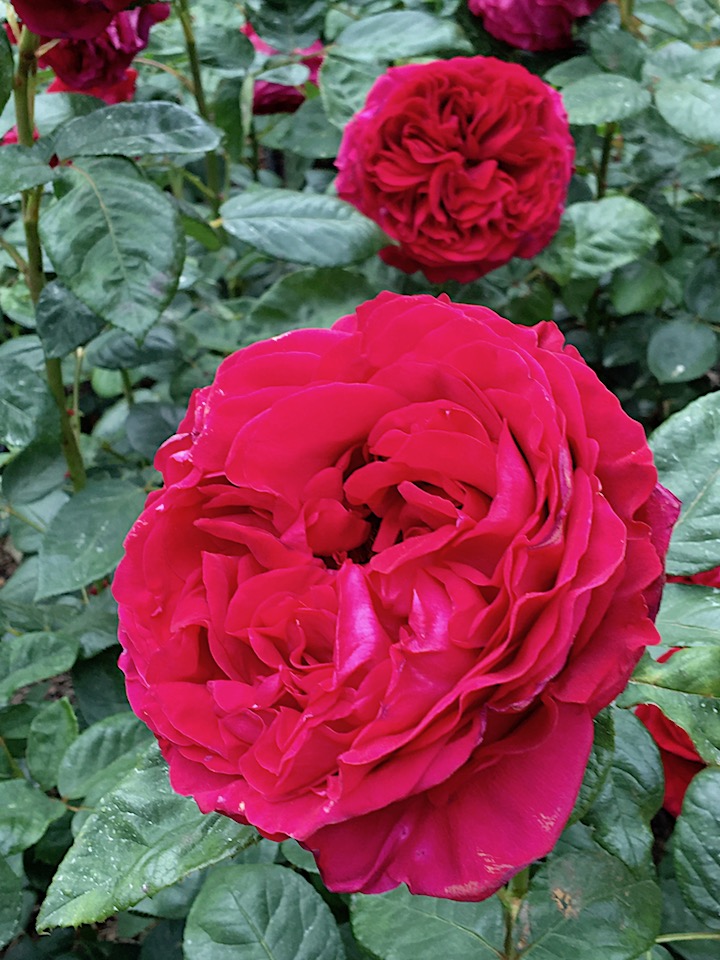 I didn’t inherit the green-thumb gene. At least not the passion for it. The less garden space I have, the more I like plants. Pots lined the windowsills of my old apartments. I even planted flowers and herbs outside one apartment building, to the delight of my landlord. But now that I have a yard, it’s too much. It’s like a dessert buffet and I don’t have appetite for any more and in fact am getting woozy from a sugar buzz. Going outside, I don’t the little palm trees that are now big, the oleander that forms a wall of green and that now is covered with pale and dark pink flowers. All I see are weeds. More work to be done. No matter how much you weed, you still need to weed. You also still need to clean the house, which gets dirty again before you’ve even finished. Where is the time for meditation and contemplation and introspection? 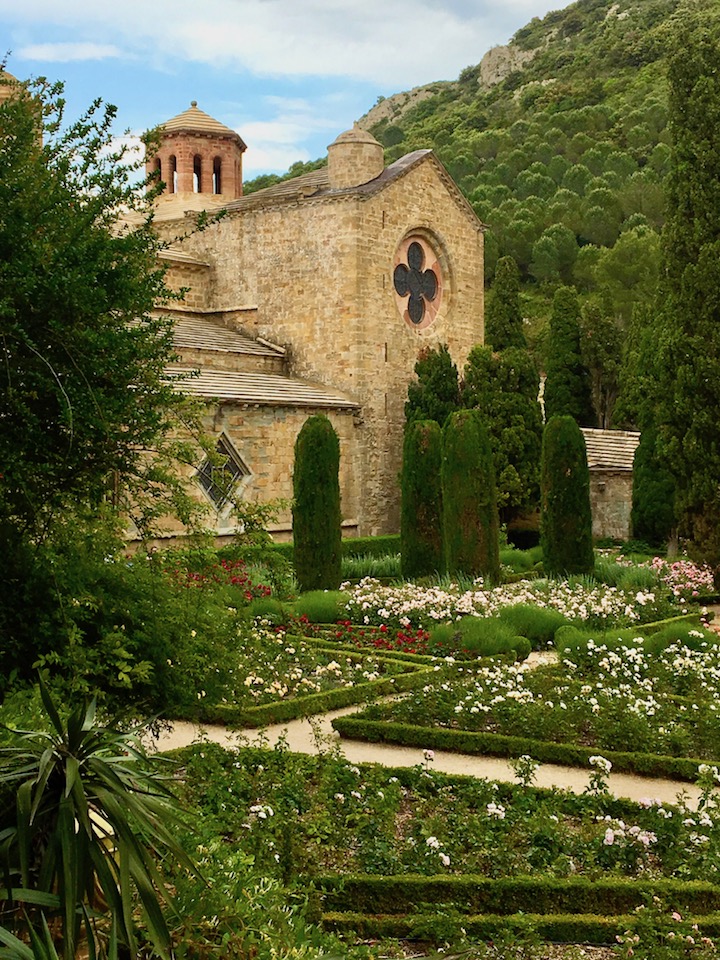 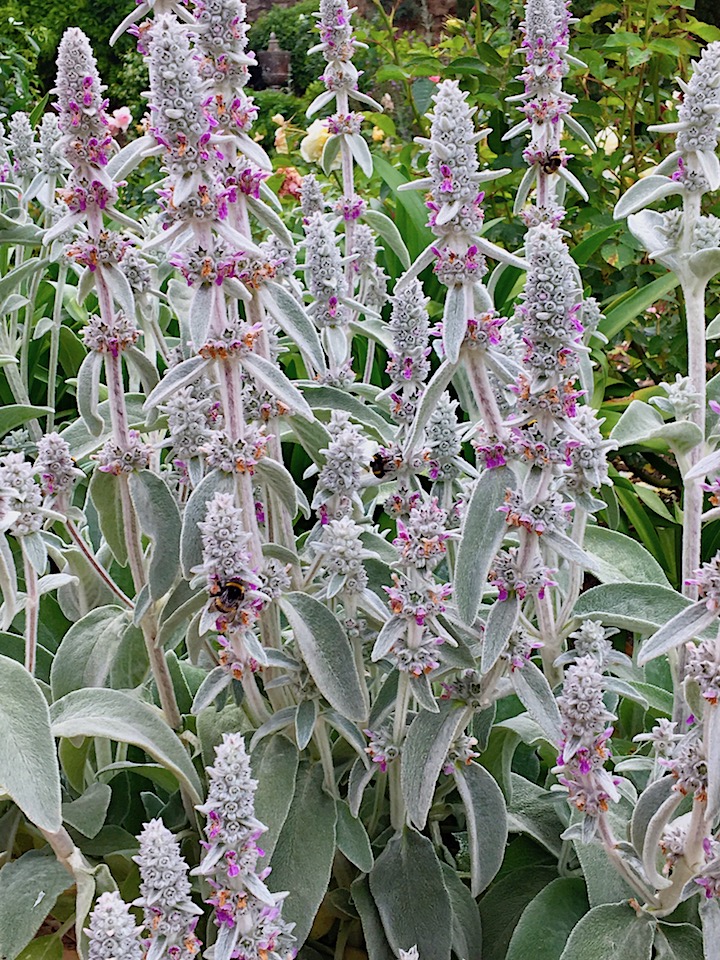 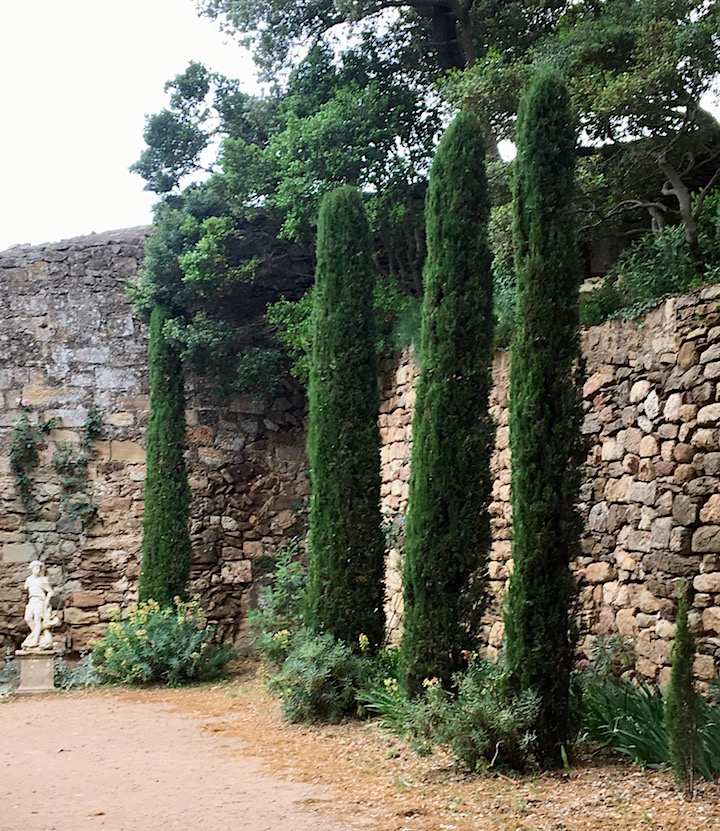 I don’t mind work, in fact I enjoy work. But the Sisyphean nature of gardening (and housework) drains my soul. And we opted for low-maintenance annuals. My mom had one of those under-the-bed storage boxes full of clippings of garden ideas. Plus some other boxes and folders (Pinterest would have been a godsend for her). She would show me some of them and I’d tell her they were beautiful, but they were 40-hour-a-week gardens and was she ready to spend all her time doing just that when she had so many other interests? She would buy seedlings but then would be occupied by something else and wouldn’t plant them, and they’d shrivel up. 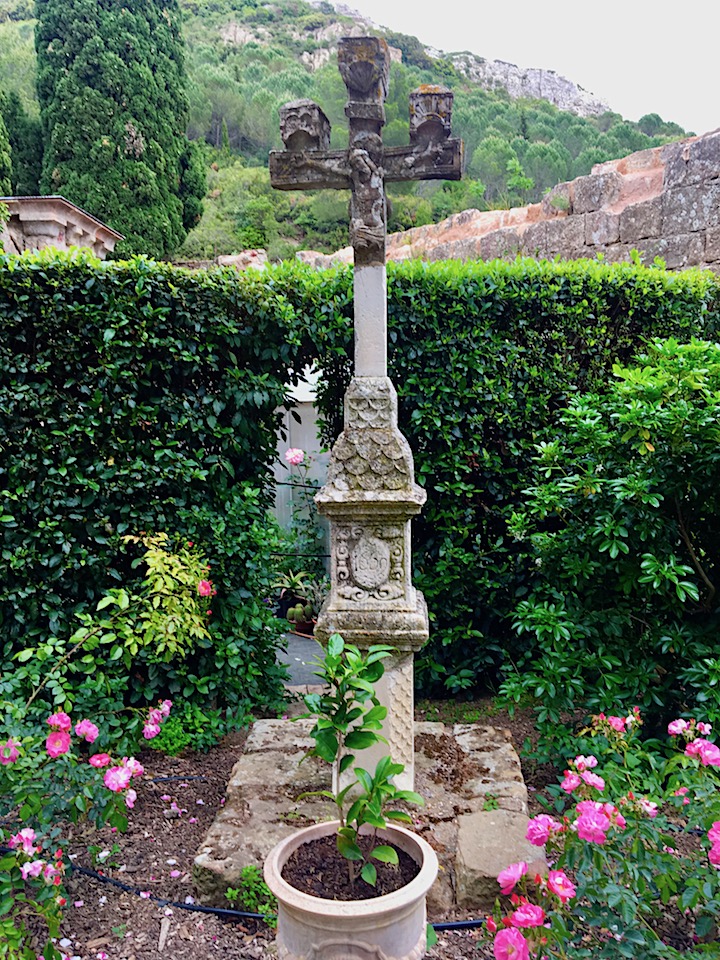 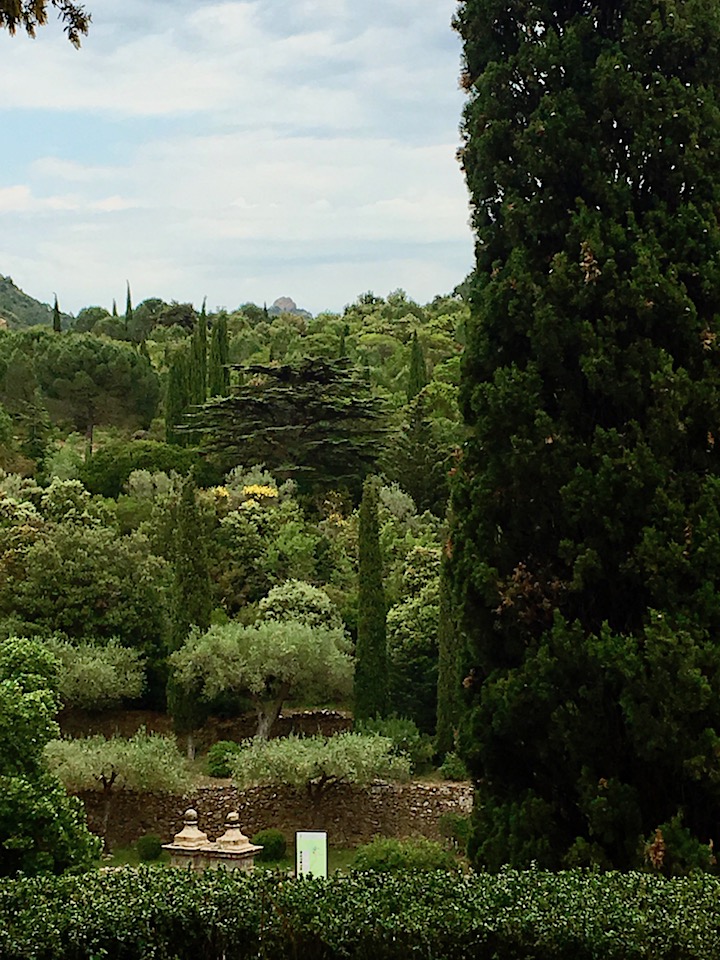 I like going to public gardens, especially ones like Fontfroide. I don’t need my own–a little patio or balcony would be quite enough. A place for a cup of coffee or a home-cooked meal outside in summer. Lawns are environmental disasters. It seems like the trend is shifting, with talk about ending zoning for single-family housing. The hearts of villages and cities in Europe are dense, even though lots of buildings have inner courtyards, like at our apartments in Carcassonne. The density makes it easy to walk everywhere, which helps keep people in shape. It means there’s time for other things than keeping up with pulling weeds. There’s time to stop and smell the roses. 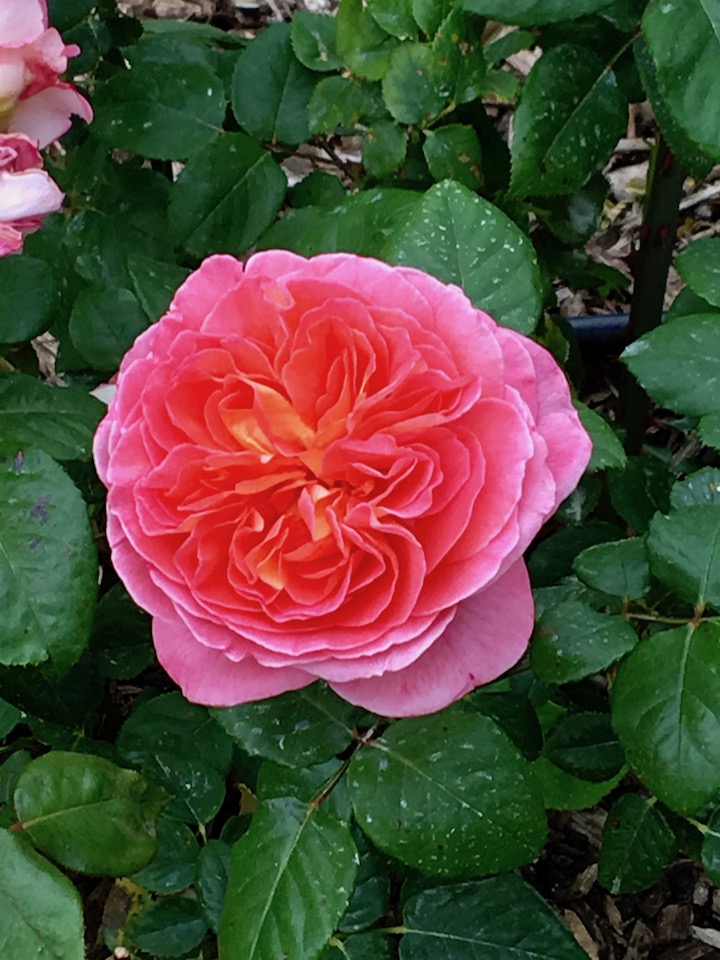 Gardening: Love it or hate it?

30 thoughts on “Gardening for Introspection”