So much to do, so little time. My cousin came to visit recently. Just a short side trip to say hi during a work trip on this side of the Atlantic. We wanted to put on a good show.

L arrived late Wednesday afternoon. We strolled through la Cité of Carcassonne while waiting to pick up the kid from sports practice nearby. We skipped the museum, but stopped to admire the rope marks dug into the lip of the big well, and the stone steps to the Basilique Saint Nazaire et Saint Celse, which slope from the wear of 800 years of the faithful’s steps. Little details like that make time real, for me at least.

We came home to a dinner of coq au vin that I had prepared in advance. Dinner was all about catching up, though. L was a pure joy. The difference in our ages meant I was out of the house—out of the country—by the time L was starting school. We barely know each other. But we know the same people, the same houses, the same neighborhoods. Stories about our shared grandmother were more vivid because when L talked about Grandma’s kitchen, I could picture every detail–the green linoleum table that was her only counter space for her incessant and abundant cooking, the pies cooling in the pantry, the celadon bowl of salt (she measured with her fingers, always).

The next day was a little crazy. I let our kid stay home from school. Good grades, rarely absent, why not. First we did a tour of our little village, then L asked what the garrigue is. So we set off past the vineyards to get a taste—a whiff—of the tangle of brush and pines and wild herbs that make the garrigue special.We had asparagus omelettes for lunch, then headed to Caunes-Minervois to see a really pretty village. We went into the abbey and down to the 8th century crypt. Since it was a gorgeous day, we moved on to Lastours, about a 12-minute drive away. There, we were perhaps overambitious. The lady at the reception told us it would take at least two hours to go up and come back. I was thinking, oh, the castles are right above us—it’s no problem. I had been there when our kid was small and got tired and had to be carried. I had taken my mother-in-law, who was not a walker. I had been there with a former colleague in his late 70s. No sweat.

We were there for an hour and 52 minutes—I can see it on my Fitbit. We didn’t stop. It’s up and up and up, then down and up and up and up. As I’ve noted before, no guard rails. At least we were alone and didn’t have to share the narrow trail.

And yes, we were alone. It is utterly glorious to have four medieval ruins to oneself, to look out over the rugged mountains and on over the plain until you see the other mountains, the Pyrénées, snowcapped on the horizon. The mountain air is sweet and clear. Only occasionally the rumble of a car on the winding road far below reminds us of which century we’re in.

Having descended, which entailed a surprising amount of climbing, we were surprised to discover the exit roped off, a sign pointing to a gate. It was unlocked and put us directly on the single road, a two-way thoroughfare with room for one car most of the time and no shoulders. In fact, it was at the bottom of a cliff on one side and a river on the other.

On our way down we had spied a group of hikers and now we caught up to them. They were a tough lot. All retirees. Considering how tired we were from our hike, we were impressed. The hikers spread out like a flock of cats all over the road. A car came and had to slow to a crawl as the retired hikers stayed planted in the middle of the tarmac, giving it no heed. Finally the car came to a wide spot and maneuvered around them, but not quite enough for one hiker.

“Attention aux mémés!” she yelled. “Look out for the grannies!” 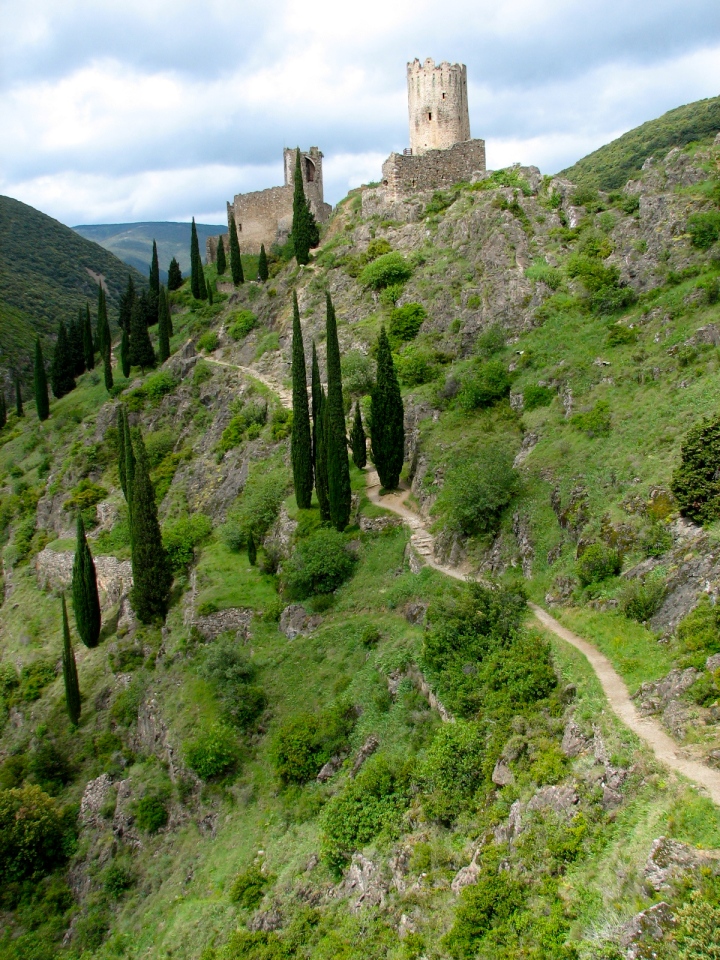 We got home in time for a short nap and shower before going to our favorite restaurant, le Clos des Framboisiers. I promise to go interview the chef sometime. The food was as wonderful as always, the service impeccable as always, the parking lot full of 11 license plates (locals), except for one car, as always. L was astounded. The menu is fixed price—€32 per person—and includes an apéritif (on this visit it was sangria), appetizer, main course, cheese and dessert. 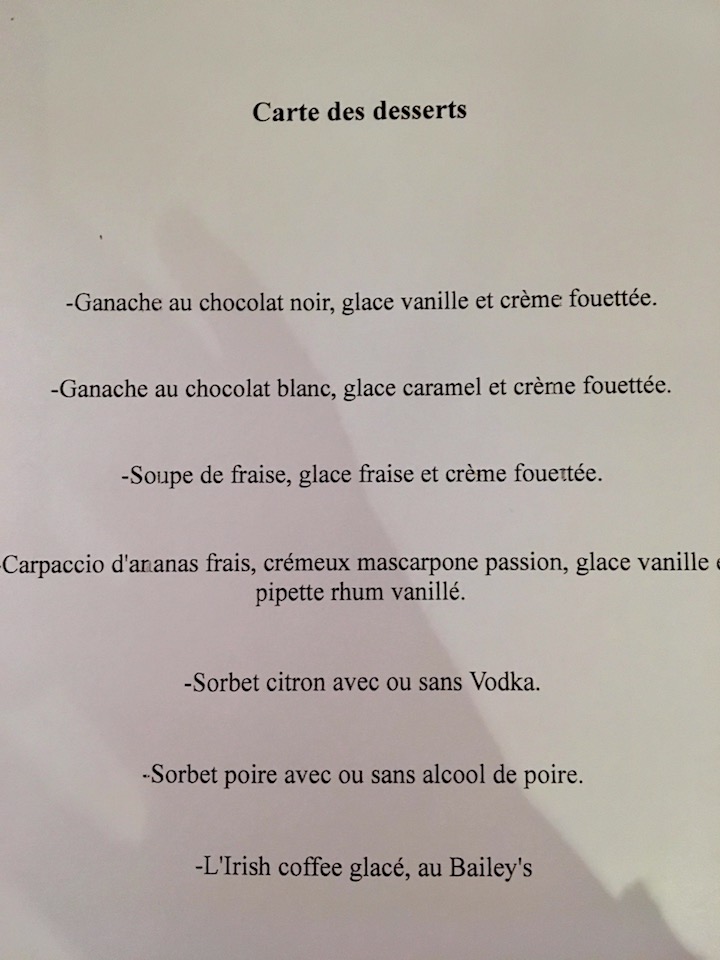 On Friday, we took it easy. (The day before we covered 10 miles, or 24,635 steps and 135 floors, according to Fitbit.) First, we went to Montolieu, to poke around some bookstores and admire the views, no climbing or hiking involved.

Then we returned to Carcassonne. We went to les halles to buy a cassoulet from a butcher for dinner. It’s a great deal. They have different sizes, depending on how many people you’re serving, and it comes out to about €7 per person. It comes in the cassole, the earthenware pot that gives the dish its name. You pay a €7 deposit for the cassole that you get back when you return the dish, or you can keep it (and €7 is a very reasonable price). It was all ready to pop into the oven—for an hour, at 220 C (425 F).  The Carnivore prepared foie gras as a starter.

We also looked in a few shops, checking out la Ferme in particular for food-related souvenirs. That store is heaven. Food downstairs; kitchen and dining accessories upstairs. The store itself is beautiful.

We had lunch en terrace at Place Carnot. Simple, but good. Then we checked out the French beauty supplies at the Grande Pharmacie de la Gare. The staff there are very helpful in explaining and finding just the right thing.

L wanted to see a supermarket, so we went to SuperU in Trèbes, which is just a supermarket and not a hypermarket (they don’t sell refrigerators or TVs or baby car seats). I agree that a supermarket reveals a lot about local culture. Milk and eggs in the same aisle, not refrigerated! An entire aisle, on both sides, of yogurt! Octopus in the fresh fish section!

On Saturday, we of course went to the market. We also stopped for cheese at Bousquet; I should have given more thought in advance to my order because just looking around is overwhelming—I want some of everything. Cheese and some good baguettes from the Papineau boulangerie across the street, plus some charcuterie, would be our lunch. And fresh strawberries.

After lunch we went back to la Cité to take in the museum in the château (la Cité is a fortified city with a château inside it). We braved the wind to walk the ramparts. 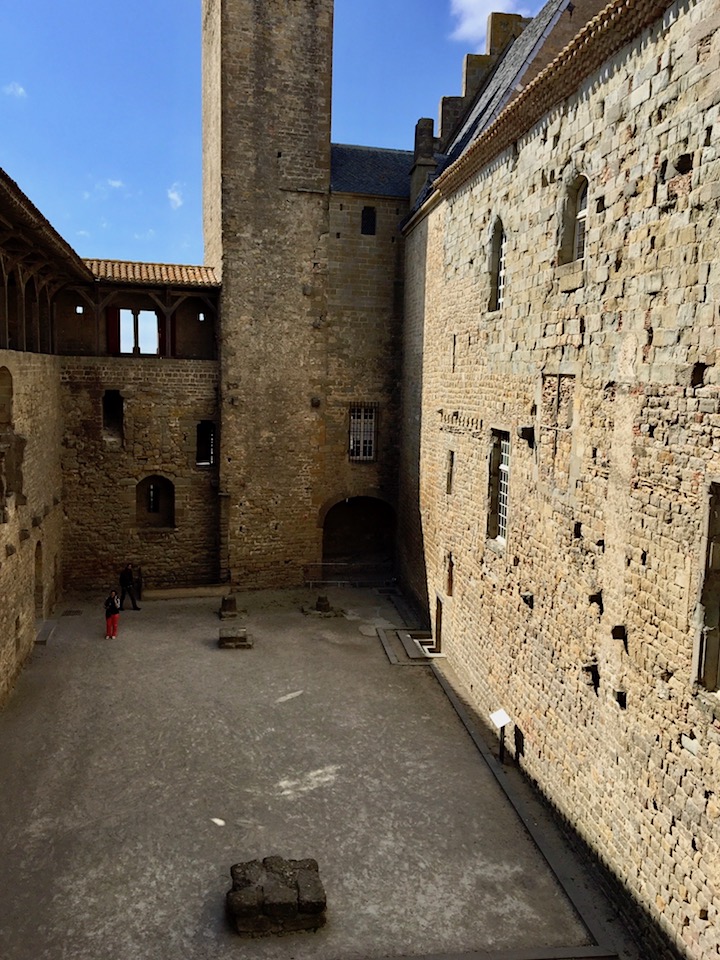 Then we cooked. I dragooned L into making cheese soufflé. Our kid made strawberry-mushroom risotto. I made a mustard-crusted pork roast and leeks. And we had pineapple-mascarpone parfait for dessert, which L also assisted in.

And that was it. A full trip, I think. Not many photos of the visit–we enjoyed the moment. Thanks to L for coming and bringing such wonderful conversation. We miss you!

27 thoughts on “Itinerary in Action”