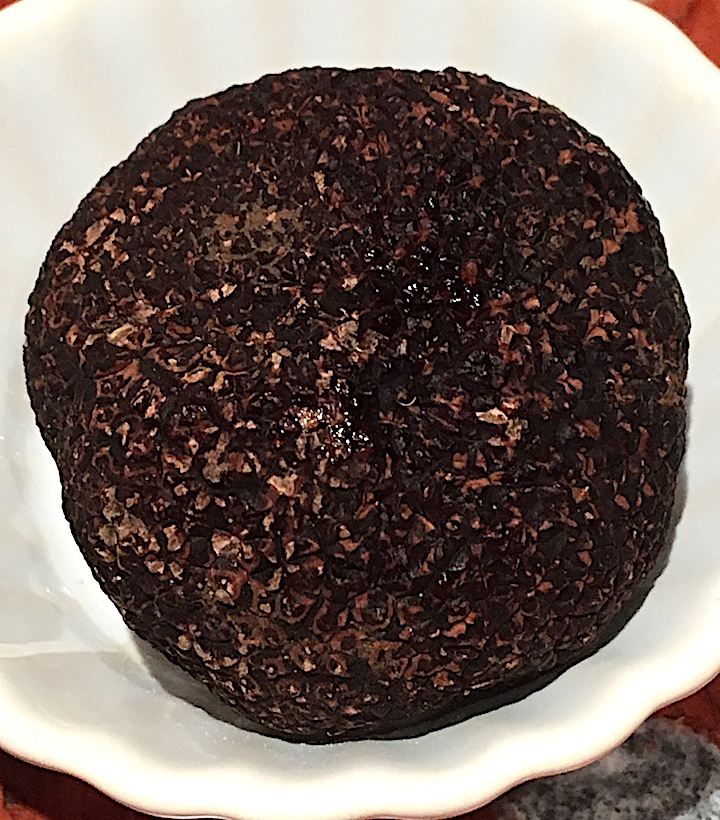 The French have the best word for thick, velvety soups: velouté. Even the word is velvety.  And we have been enjoying a velouté of white beans since the Carnivore picked up the recipe at a truffle market, where he got this beauty. They call truffles black diamonds for a reason.

It was velouté de haricots lingot et truffe–a thick, velvety white bean soup with truffles. OMG. Lingots are ingots, like the bars of gold, but in this case they refer to the special white beans grown just west of Carcassonne and used for cassoulet.

Here’s the recipe, handed out at the market. We didn’t follow it precisely because the box of lingots was 500g and we weren’t going to keep 100g sitting around lonely like that. Also, it calls for a 30g truffle, and ours had been whittled down to 13g. I tell you what, it was still fantastic.

We made it again, with rehydrated dried shiitake mushrooms–yummy. A good alternative when truffles aren’t available.

Like so many French recipes, you have to make it over two days. The night before, soak 400 g (14 oz.) of beans (or more!). Separately, chop up your truffle and infuse it in 10 cl (about 3.5 fluid oz.) of heavy cream. (You might want to keep a few shavings on the side for garnish.) If you don’t have a truffle, use about a half a cup of shiitake mushrooms that you soaked and put through the blender or food processor to get the effect of shavings.

Next day, cook the beans. Start with cold water and cook them for two hours.

Peel and mince half an onion and one carrot (I set out two carrots for the Carnivore to use and he fell for it. And the soup was divine despite double the vegetables.)

When the beans are done, drain them and rinse with fresh water.

In a casserole, heat a tablespoon of olive oil and cook the carrots and onion to soften them but not brown them. Then add the beans and half a liter (17 fluid oz. or just over a cup) of chicken stock. Bring to a boil and then drop the heat to low. Cook for 30 minutes.

Remove from the heat and add the truffle cream. Salt and pepper to taste. Use a soup mixer to turn it into a creamy, velvety, homogenous texture. If you use a blender, let the soup cool before blending–for safety–and then reheat.

Serve with a few shavings of truffle, if you have any left.

We have a mushroom hater in the house who devoured this because the mushrooms were reduced to tiny bits (we didn’t mention them, either). If you aren’t a fan of mushrooms, I guess you can go without, but since they’re so tiny here, you don’t notice them–you just get the depth of flavor that they add.