Paris is such a treasure chest of marvels that one could spend a lifetime unpacking them and still not get to half of them. It’s why so many people who visit France never get out of the City of Light. But those folks are missing out on a completely different view of French life. To me, one needs both to understand and appreciate France.

Since most people don’t have infinite vacation time, it’s necessary to prioritize and to be efficient, while still allowing for serendipity. A strict schedule is a bad idea! But so is running back and forth needlessly.

What kind of traveler are you? Are you up for walking? How much walking? I am happy to walk for 10 hours straight but I’ve found that most of my travel companions over the years would prefer somewhat less than that. The more you walk, the more you need to know where you’re going so you don’t backtrack.

On the other hand, wandering aimlessly and enjoying the architecture, shop windows and passersby is a time-honored tradition in France, which invented a word just for that: flâner. Your schedule should include a bit of flânerie in each neighborhood; it’s how you’ll spy the perfect souvenir in a little boutique that will remind you for years of your trip: a scarf, a book, a bag, a dish, a picture. NOT an Eiffel Tower keychain or a Paris T-shirt (though, if you USE them, why not!). It’s when you’ll get the photos that capture the spirit of France—in the streets and not in a museum gallery.

Which images do you conjure up when you think of Paris? Which things do you absolutely have to see? Notre Dame? The Eiffel Tower? Sacre Coeur? Pont Neuf? The Louvre? Les Champs-Élysées? Are you interested in history? Architecture? Art? Fashion? Food? All of the above?

Break it down again. History: which periods? Roman? Medieval? Renaissance? Art: what kind? Impressionist paintings? Modern? Sculpture? Street art? Decorative arts? As wonderful as the Louvre is, it’s a pain to get through security and deal with crowds (I saw the Mona Lisa once, kind of, in a terrifying mob of people, almost all of whom held cameras over their heads to snap photos. WHY? They can see photos, without strangers’ hands and cameras, on the Internet! Why do people take photos of art anyway? Go to the gift shop and buy the post card!). Either head for less-frequented galleries or go instead to one of the smaller museums specializing in whatever’s your jam. Le Musée de Cluny is all about the Middle Ages; Arénes de Lutèce are Roman ruins. Le Musée d’Orsay has Impressionists; le Musée Marmottan has Monet; the Picasso museum has Pablo; the Rodin museum has sculpture, including the Thinker; le Centre Pompidou has modern art. Paris has no shortage of museums. Some of the smaller ones are likely to be the most memorable, because you won’t be in a crush of people. Museums like Musée Nissim de Camondo (full of fine art and furniture), Musée Jacquemart-André (15th to 18th century art) and Musée Cernuschi (Asian art) are all in former mansions around Parc Monceau in the 8th arrondissement; the park also is a delight for people-watching. 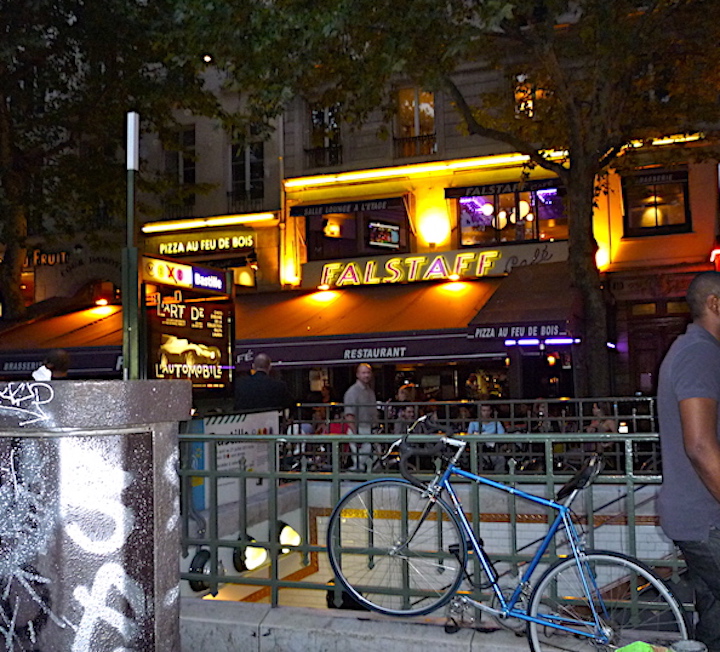 Only you can say what interests you. Don’t feel pressured to see the Mona Lisa when what really trips your switch is Louis XVI furniture—instead head to the Louvre’s Richlieu wing, first floor, rooms 500-632 (the 600-rooms are in the Sully wing, but you will flow through to them), which display European decorative arts—fabulous palace rooms full of antiques. Or go to the Musée Nissim de Camondo. Or take a day trip to Versailles.

If you really want to go to the top of the Eiffel Tower or to the Louvre, buy your tickets in advance! This will save you a huge amount of time. In fact, in both cases, you have to select a time and date; otherwise you have to stand in line and hope there is still room. (The Louvre is closed on Tuesdays, as well as Jan. 1, May 1 and Dec. 25. In addition, some of the rooms are closed on different days, so look at the schedule to be sure that you can get into the collections you want.) Louvre tickets here; Eiffel Tower tickets here. 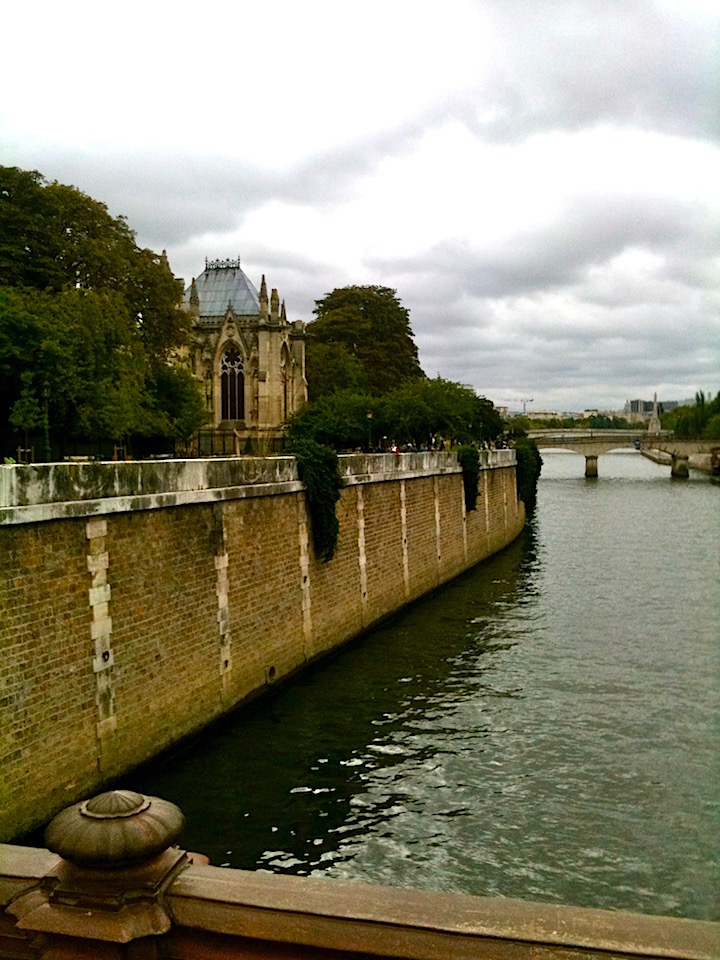 Plan your day by starting with the musts, because you might run out of time for everything on your list. Also, keep in mind the habits of other tourists: they sleep in a little, because they’re on vacation, after all. They have a leisurely breakfast at their hotel or in their rental. Then they mosey out to start sightseeing around 11. Some say, “oh, heck, it’s almost noon, no time for seeing big Sight X,” and they do some little thing before having lunch, hitting the tourist trail in force around 2 p.m. In other words, the worst time to do anything touristy is in the afternoon.

I would aim for seeing the Eiffel Tower at 9 p.m. It’s open until 11:45 p.m. Make sure to get there early because even with pre-purchased tickets you have to stand in line for airport-style security. The site says it takes 2.5 hours for a visit to the top because you have to change elevators and there are lines. But you are unlikely to be in line with a lot of families with small children; even most adults are going to be at dinner then—in fact, plan your meals accordingly. (If you have kids, I would skip going up and instead go to the top of the Tour Montparnasse or the top of the Arc de Triomphe, both of which give you views of the Eiffel Tower and of the city from up high, without the long waits.)

Similarly, at the Louvre, consider getting there first thing (it opens at 9 a.m.) or go on Wednesday or Friday night, when it’s open until 9:45 p.m. In fact, the museum’s own Web site advises this. They even have an app that shows how busy the museum is. This is key if what you’re dying to see are the Egyptian mummies, whose galleries typically are a miasma of sweating humanity and no matter how much your kid is into the topic it will be a disaster that is difficult to escape from—you just have to follow the flow. Another tip: unless the weather is great, enter via the Métro station to avoid standing in the long line to the Pyramid in the courtyard.

It’s hard to say which neighborhood you’ll be in at mealtime, so the best thing to do is to pick a restaurant as you would a bottle of wine. There are telltale signs of very good or very bad, which I elaborated on here. 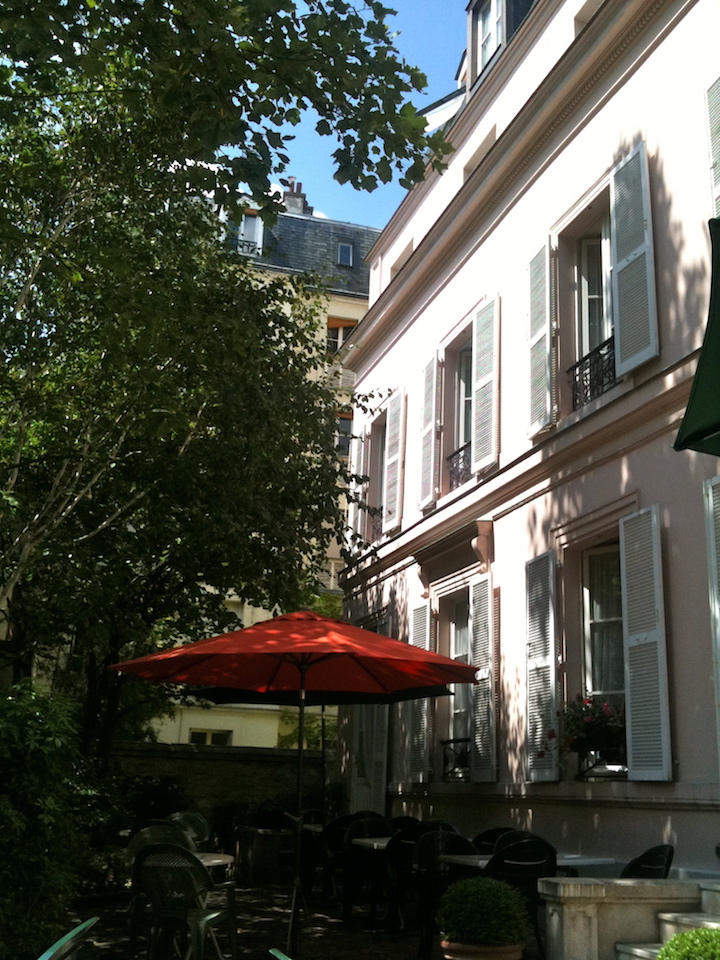 I’ve stayed in many places in Paris, but my favorite hotel is Hotel des Grandes Ecoles in the 5th arrondissement. It is one of the few places in Paris where you are likely to wake up to the sound of birds singing, thanks to its lush interior courtyard (in fact, you might want to ask for a courtyard room when you reserve, although it’s on a very quiet street).

According to the Earful Tower podcast (go subscribe now if you’re a francophile!), the 5th is the best district for flâner, because you can wander from the Arènes de Lutece to the Pantheon to rue Mouffetard (that market street in the Amélie movie) to the Latin Quarter around the Sorbonne. It also has the Jardin des Plantes, the Grande Mosquée (excellent tea room; I used to frequent the hammam but hear it isn’t so great any more), the Institut du Monde Arabe (beautiful architecture, interesting exhibits on art, history and culture, and great views from the rooftop café) and, my favorite thing in Paris: open air (summer only) Argentine tango dancing on Friday and Saturday nights at the Jardin Tino Rossi, right next to the Seine.

The 1st is the place for fashion, with rue Saint-Honoré lined with boutiques. Hotel Costes is a hangout for the fashion crowd and has such wonderful service. I once had a six-hour lunch with a friend there—the waiter discreetly refilled the water carafe but never were we pressured in the least to wrap it up and leave. Coco Chanel’s original boutique, at 31 rue Cambon, is just off rue Saint-Honoré. The Palais Royal courtyard is rather hidden, but you’ll recognize the iconic striped columns. The Louvre also is in the first. And nearby is Pont Neuf, leading to Île de la Cité, a charming place to explore and also home to the stained-glass wonder that is Sainte-Chapelle.

And you’re right by Notre-Dame, also on Île de la Cité. However, Notre Dame is in the 4th, the Marais, packed with interesting shops and cafés. It’s also home to the Picasso museum, among many others. My other favorite secret place in Paris is the Marais Dance Center, hidden in one of the oldest courtyards of Paris at 41 rue du Temple and dating to around 1580. You can sit at the cafe in the courtyard and look up, “Rear Window” style, at ballet in one window, salsa in another, waltz in another…Walk down the boutique-lined rue des Francs Bourgeois to Place des Vosges, where you can sit (not on the grass) and watch very chic parents with their very chic children at the small playground, while a busker sings exquisite opera aided by the acoustics of the surrounding arcades.

Montmartre is in the 18th, a bit farther from the center. From Sacre-Coeur you get great views, and the surrounding streets—except for Place du Tertre, which is unpleasantly touristy—are charming. At the tiny Square Suzanne Buisson, you might find locals in a game of pétanque; one day when I did, I watched a while, amused, and when I left they stopped playing and tipped their hats!

Montmartre is kind of off the path, and you’re likely to take the Métro (Line 12 to Abbesses or Line 2 to Anvers) and then possibly the funicular, which offers great views. You can combine it with some of the little museums near Parc Monceau, which is on Line 2 of the Métro. In fact, you could start at the Arch du Triomphe for day views, take the Métro to Monceau, then the Métro again to Anvers/Montmartre. That is, if you like views, museums and parks. But it also includes plenty of gawking in little streets around Montmartre.

The Eiffel Tower is in the 7th, along with some great museums—Rodin, d’Orsay, Maillol (one of those charming little ones). It’s also home to le Bon Marché, the oldest of the grands magasins, or department stores. However, they aren’t really close together. I would wander from Musée d’Orsay to the Musée Rodin and then over to the Bon Marché and maybe on to the Jardin du Luxembourg and its little pond where kids (some of them with gray hair) sail little boats, though it’s technically in the 6th. Then I’d go back separately to the Eiffel Tower after dark.

This post has devolved into a lot of rambling. The point is to encourage you to pick your top destinations—YOURS, not some blogger’s! Or your friends’!—and to look at what else interests you nearby or on a convenient Métro line and to consider opening times and lines so you can make a plan for each day that’s both enjoyable and efficient.

32 thoughts on “Paris Tips: Timing Is Everything”