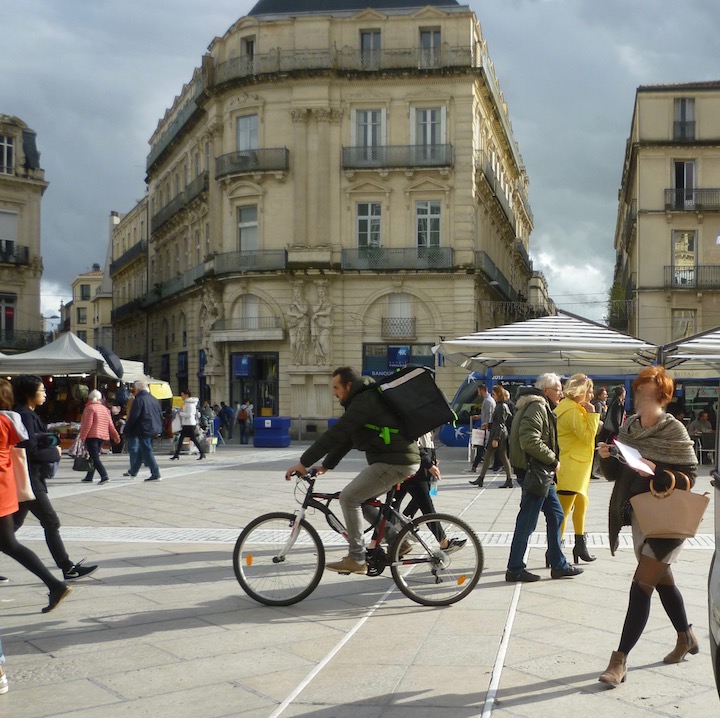 What to wear? If the photos of Parisian fashions seem too crazy, take some cues from the more laid-back south of France. On some outings to Toulouse and Montpellier, a few trends were evident.

While I usually use only my own photos, it was next to impossible. Either I photograph or I shop. As I was with a very chic friend who wanted to shop, there was a limit to how much I could stop for photos, especially since I have an ancient point-and-shoot camera whose shutter works when it decides to. (New phone with decent camera on order!)

However, please note in the top photo, taken in Montpellier, the color. An orange coat, a red coat, and a woman in a bright yellow coat with yellow tights.

I did stop a woman at the market. I was with the same friend, who told me, “THAT’S how you should dress,” pointing to an extremely elegant woman buying vegetables. She really was stunning. I went up and asked to take her picture. She demurred, then agreed as long as I cropped off her face. I showed her the photo afterward to make sure she was OK with it.

We got to talking, and it turned out she was 82!!!! I would have guessed 60-something, and maybe less from farther away. She walked like a dancer, with perfect posture. Tall, slim, with a great haircut and just-right makeup–enough to not look faded, not so much as to look painted. I have seen her from time to time since, and she is unfailingly elegant.

As I don’t always have time to talk for 15 minutes for every photo, I sometimes snap from behind, to get the idea of the outfit without someone’s face. But too often people cross in front, and it’s hard to focus….

So I took some photos from a few popular retailers that one sees around French cities. I link to their sites as a thank you for using the photos. I don’t get anything from it and they aren’t advertising. Any advertisers you see here are thrown in automatically by WordPress to make up for me using the free version and I don’t get anything from them nor even know who they are.

We must admit a picture is sometimes worth a thousand words. So here are the main trends I saw:

The fanny pack as bandolier.

Mostly spotted on men, but I did see it on a few women. It was far more common in Montpellier, where everybody seems to be under age 25, than in Toulouse. I have seen it only once in Carcassonne, which someone once described to me as “une ville mémère”–granny town. In Montpellier, I saw a woman whose fanny pack/bandolier had a metal chain strap like a Chanel bag. Go figure.

Untucked is over. Men and women alike wore their tops tucked in–all the way around. Not the fake tucked-in-front, out-in-back move. That is so 2015, Jenna Lyons.

Again and again I saw young women with enormous, chunky sweaters tucked into their trousers or jeans. The sweaters weren’t cropped–that would have been a boxy shape on top. The trend was to create billows of material just above the waist.

My fashionable friend explained that it was about the silhouette–you can’t have a big top and looser bottoms without defining the waist, otherwise it just looks sloppy.

High waists are back.

I have heard this routinely ever since waistlines started to descend in the late 1990s. It seems to be true this time. Those big sweaters are tucked into high-waist pants or jeans, and cinched tightly with belts. Self-belts that match trousers are OK, but with jeans you need a brown leather belt that’s way too long and you loop the extra end around artfully.

Also, the jeans can be oversize mom/boyfriend cut, preferably large enough to create a paperbag effect when you cinch that belt.

You don’t have to wear jeans.

Lots of very young women and teens were wearing pinstripe and plaid (glen or tattersall) trousers. If the pants had wide legs, they were cropped. Otherwise, the “carrot” shape with tapered ankles was common.

(No idea why this photo is so small!)

The ugly shoe has arrived.

However, the uglier the shoe, the prettier the person, otherwise it backfires (which we also saw). That rules out ugly shoes for me.

Have you seen any of these trends where you live? Would you wear them?

Also: check out this great video from Oui in France of what goes on in a French bakery. Good thing we can’t smell it. I would eat all the bread.

43 thoughts on “South of France Fashion”