About two hours before the cyclists of the Tour de France pass by, there’s complete craziness on the route as the beloved caravane parades through, tossing goodies to bystanders. 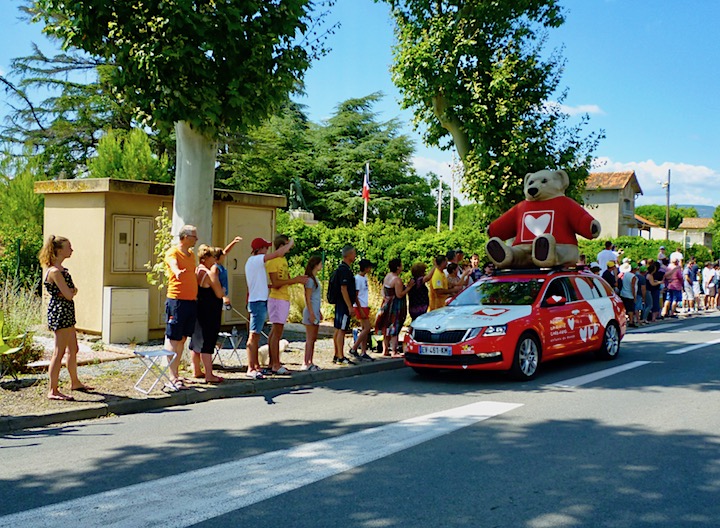 No homemade homecoming floats here. It’s all professional, promoting the official sponsors of the race. They are simultaneously slick, professional advertisements and laughingly absurd. 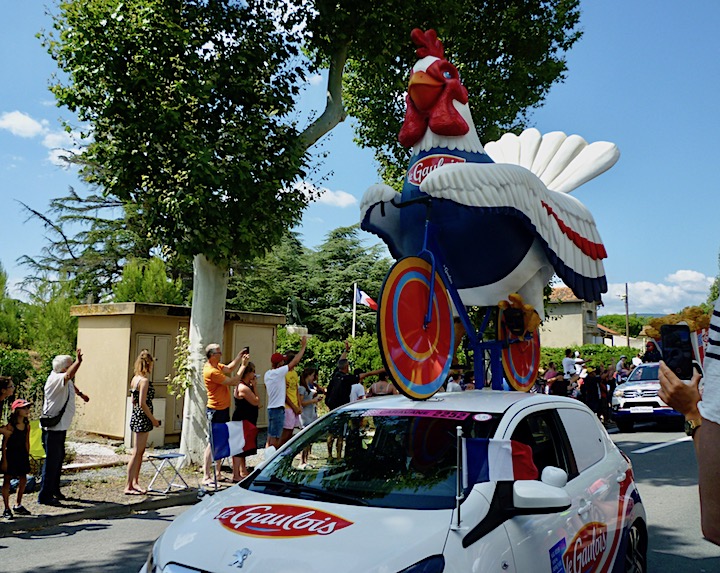 Take, for example, the Gaulois chicken brand. Yes, chicken–the cigarettes are Gauloises, feminine. The first vehicle had a chicken on a bike. Yes, it’s the Tour de France, and it was all bicycles all the time. But I learned during a trip in Mali that really tough chicken is called poulet bicyclette–bicycle chicken–so hard to chew that it must have been raised riding a bike, which doesn’t seem like an image to promote. On the other hand, the number of spectators who have eaten tough chicken in Africa is probably low. 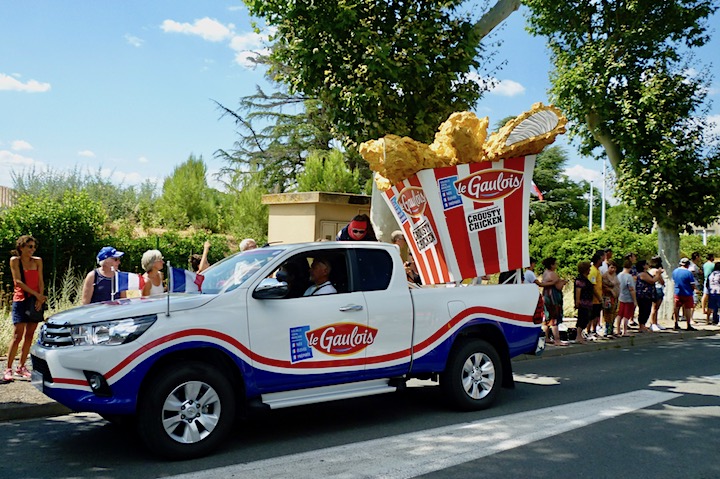 They also had nuggets…”Crousty Chicken” is quite the franglais mashup. “Crusty” in French is croustillant.

Gizzards (you KNOW you’re in France when gizzards are all over your salad, whether you asked for them or not)… 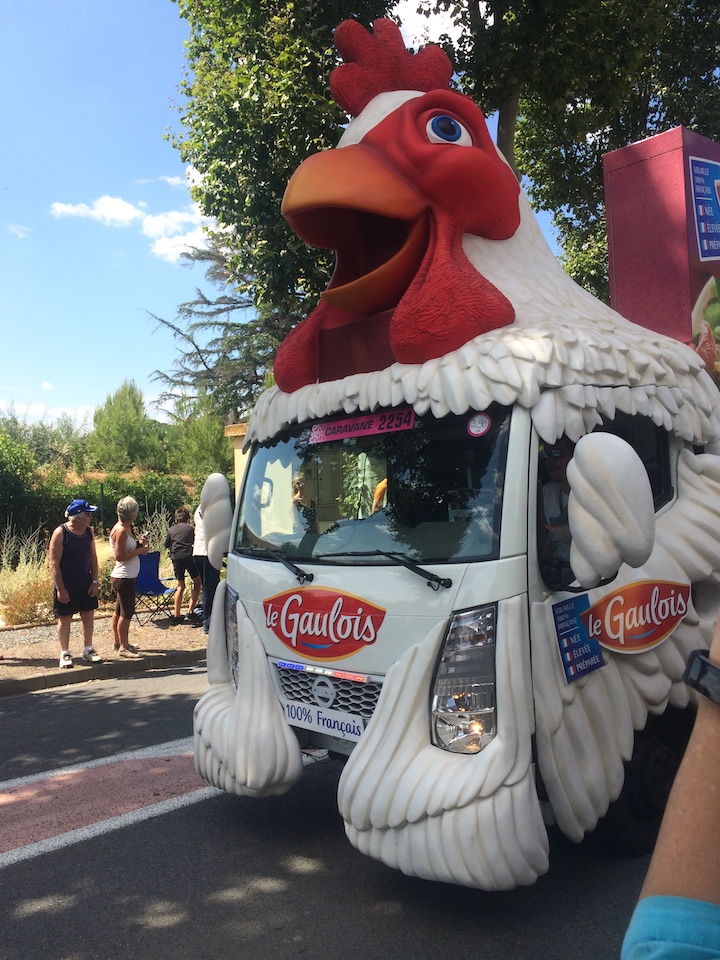 It takes a certain nonchalance to drive such a beast, no?

I don’t remember what they were throwing to the crowd, but we didn’t score any. Keychains? Magnets? The top photo shows Vittel, and they handed out bottles of water (no throwing those!). Then a float came by with people spraying the crowd with mist. Years ago, people would dance and jump in the mist, arms in the air, but this time everybody hurried to protect their phones.

This one is very Parisian, n’est-ce pas? The lamp post, the advertising kiosk….Krys is an optician chain.

The floats are an opportunity for people to live out their superstar fantasies. Parading past adulating crowds. Several floats were like Krys, with booming party music and somebody pretending to DJ, and usually some dancers. Never mind that the crowds want freebies and don’t care about you. A person can dream!

Cochonou (cochon is pig; Cochonou is a brand of hard sausage), with its iconic red gingham on iconic Citroën 2CVs. It’s definitely the crowd favorite–they distribute little sachets of sausage. Where else, right?

Madeleines….and they throw out little packets with two madeleines in each! 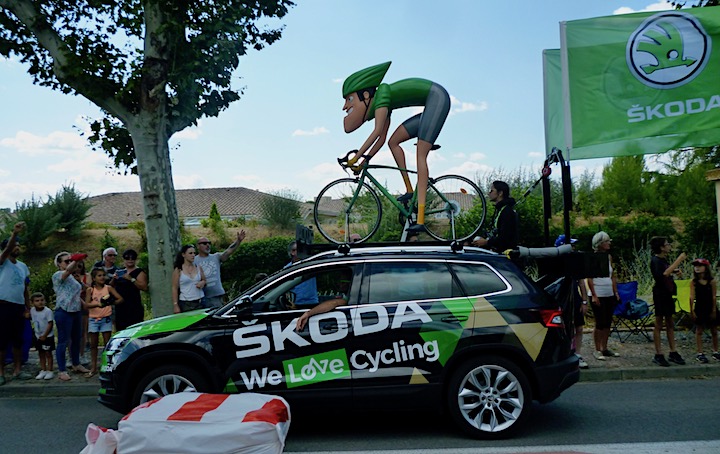 This one cracked me up–the family biking and the mother and daughter are smiling but the dad is grimacing. Skoda is a brand of cars built in the Czech Republic, owned by Volkswagen.

Candy is dandy…and of course that’s what they tossed out.

Laundry soap…we scored a sample of that.

I noticed that the people on the floats were wearing harnesses that were attached to the vehicles. It was kind of odd to see the ones who were on bikes (not on the road but atop the floats, a common theme) or dancing tied to the float. The ones who were throwing stuff really leaned out, and I suppose the sponsors didn’t want falls, even though the floats go much more slowly than the racers, at least in towns.

McCain is a brand of French fries. Notice that they’re in a fryer basket–there’s even the handle on the back. 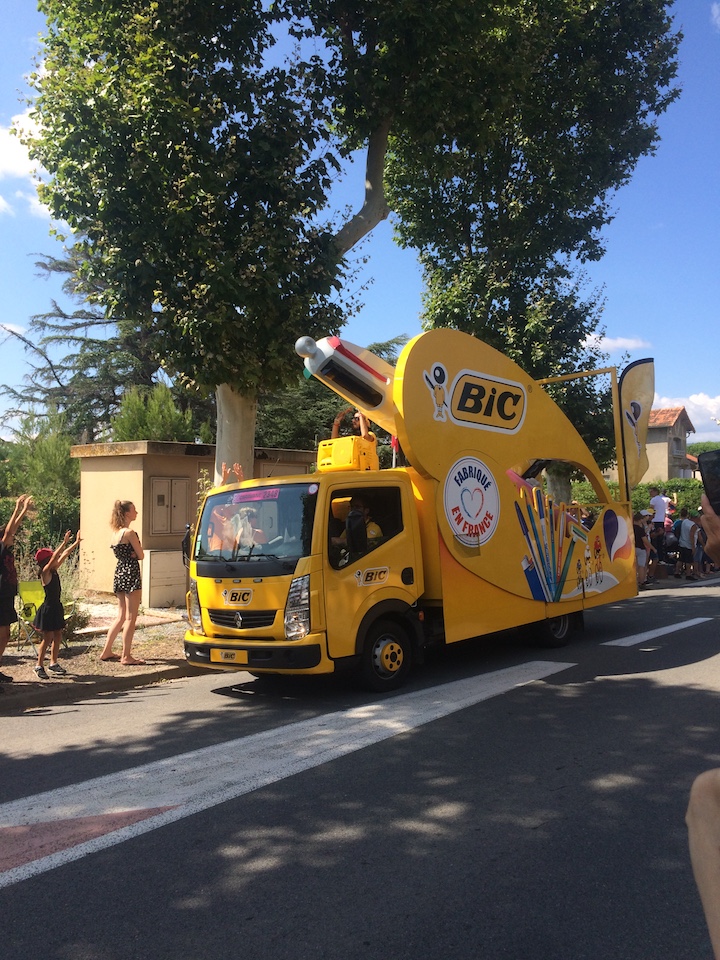 Bic pens, native to France, are so iconic that many people don’t say stylo (pen) but instead say Bic, the way people refer to a photocopy as a Xerox or a paper tissue as a Kleenex.

Lots of fun, with lots of scrambling for prizes. If you want to see an old guy race a young kid, just throw a free refrigerator magnet in between them.

On Tuesday, I did a post about the actual cyclists. And if you missed them, you can see the posts from when the Tour came to Carcassonne two years ago: the caravane and the race itself.

Did you know about the Tour de France caravane?