One of the highlights of my life is a family vacation in Italy with my parents, my siblings and their families, plus an aunt. It was before the arrival of the Carnivore and our kid. I was the tour guide.

Here were the calculations: Europeans go on vacation in July and August, because school vacations don’t start until then (some places get out in mid-June). So for smaller crowds and lower prices, we would schedule the trip for right after the kids got out of school in late May.

Having so many people was going to be tricky, especially with kids ages 2, 3 and 4, and elders ages 61, 71 and 76, none of whom were up for walking all day. We wanted to sleep under one roof (which ruled out my one-bedroom apartment in Brussels) and have a place for two minivans to park. Good weather would be a plus (which also ruled out Brussels).

These things also eliminated Paris–we’d have to get pretty far out before being able to find a house big enough and in the price range, and getting around Paris isn’t very easy if you aren’t on foot (and no, I was not going to try to herd 13 people in the Metro). The weather could be freezing or gorgeous, most likely both…in the same week. So despite the fact that I adore Paris and had the advantage of speaking French, I opted for Tuscany. (I had been to the south of France only once then, so I didn’t think of it—now I know better! But Tuscany was great.)

“You don’t want to go to Italy, hon,” Dad informed me, pronouncing Italy like IT-lee. “It’s a mess. You can’t drink the water. I’ve been there.”

Yeah—when he was in the Army, with the U.S. occupation after WWII.

It was before the advent of AirBnB, but online rentals were available, with horror stories outnumbering the selection of properties. OK, confession: it was in 2001.

I found a beautiful villa outside Florence, Casa Il Focolare, on a hill with sweeping views, a pool and lots of bedrooms and bathrooms. They have upgraded the décor; it was more basic when we were there, but very comfortable–you really have to check out the web site to see how pretty it is now. Rural enough that the kids could run wild around the grounds. Not too far for trips to Florence (30 minutes by car), Sienna (45 minutes), San Gimignano (45 minutes), Pisa (1 hour 15 minutes, to see the “bending tower” and also the beach at Livourne) and, twice, Rome (just over an hour). Plus the cute, less famous villages of Tuscany.

I’d reserved two minivans, but unfortunately, they had only one; the second vehicle would instead be a full-size monster called a Ducato. It had a horizontal steering wheel, like a bus. It held nine people, so we still needed the normal minivan, which held seven.

The next challenge was driving from Rome to the villa. My siblings, being pros at crazy roadtrips, had brought walkie-talkies (which, FYI, are called talkie-walkies in French. In Italian: walkie-talkie). I had a cell phone, but it was still early days and so expensive the others would have had to take out second mortgages to pay for international service (what a horror…I also had a “callback” service–illegal–where I called a computer in the U.S. with my Brussels landline and then hung up. The computer would call me back and patch me to an open line from which I could call U.S. numbers at domestic U.S. long-distance rates and not the approximately $5,000 a minute that Belgacom charged for international calls. It’s far more reasonable now).

Anyway the walkie-talkies worked great as long as we were in range. And the patter was nonstop.

<<static>>”I thought you were supposed to stay on one side of the dotted white line.” <<static>>

<<static>>”She never could paint inside the lines.”

<<static>>”You gotta fix those things when they’re kids or you can see what happens.” <<static>>

One of the adults would ride shotgun and consult the gigantic fold-out paper map (it was before GPS, too). One time in Rome, I asked my co-pilot which way I needed to go only to see the huge map getting frantically turned around one way, then the other.

“We’re on … V…I…A…We’re on Via!” somebody from the back seat called out triumphantly.

Did I mention that nobody spoke Italian? (EYE-talian, as Dad said)

Another time, some of the women went to Greve, a very quaint town. The guys weren’t there when we got back. When they finally arrived, one made a grand wave at the other two and said, “Let me introduce you to Louis and Clark.” They had gotten very lost trying to go to the supermarket in Montevarchi.

No harm, no foul. No accidents, either.

There was another time, again in Rome, when a local colleague, who had generously gotten us tickets for the Mass with the Pope in St. Peter’s Square, was going to make the handoff as we drove down a boulevard near his home. I was talking to him on my cellphone (BAD) and trying to watch crazy Roman traffic while trying to spy the landmarks he was telling me to look for. Finally seeing him, I eased into the right lane and slowed to a crawl. My co-pilot rolled down the window, stuck a head and hand out, and snatched the tickets before anybody rear-ended us or even honked. Smooth as spies.

Most tourists probably don’t realize there’s an underground parking garage at the Vatican. With low clearance. Happily, the rental company didn’t look at the roof of the megavan when we returned it.

Then there was the time I got near the Coliseum and looked for a place to park, only to go down a street like a funnel—it got narrower and narrower, until I had to back out. Which mean the normal minivan with the rest of the family had to back out first because they were behind me.

And the time I was trying to get the megavan out of the tight turn on the villa’s driveway (which was so steep that our dad described a little grotto alongside the drive as “right before you go over the cliff”). Another guest’s car was in the way (there are also a couple of apartments on the property). One of the guys in front and another in the back directed me: get closer, cut it sharper, crank it the other way. They made catty remarks about how I was riding the clutch. “Might as well burn it out on a rental,” one said. “She’s just warming it up,” the other observed, adding, “She ain’t even spittin’ gravel yet.” At that moment, I gave it gas and sent a couple of pebbles flying. They cheered.

It was so difficult to park in Rome that we generally went to a garage then hoofed it. The littlest kids were in strollers, but our parents weren’t as lucky. Instead, I put them in a taxi, with our aunt, at the Trevi Fountain and told the driver “Piazza Navona.” I will never forget the image of three shocked faces looking at me through the back window as the taxi peeled off. They thought I would come with them. But I had figured that, with traffic, we would arrive on foot before the taxi (and it was true).

Our other challenge revolved around Italian dining customs vs. toddler attention spans. The kids were angels, but too much time sitting nicely at a table is no fun. So we would try to be fairly organized, to have our meals before meltdowns. Good Midwesterners, the guys would order coffee with their meals. They were new to wine, and certainly not at lunch. The waiter would nod, si, si, signori. Of course, the coffee wouldn’t arrive. They would remind the waiter, who would nod and say, what we figured was “don’t worry, I didn’t forget.” Dad would thank them with a heartfelt “Garcia!”

The kids would grow restless. No coffee yet. Then the kids would get VERY restless. No coffee…because of course, coffee is served after dessert, which we hadn’t yet eaten. Eventually we would need to leave—unhappiness in toddlers increases exponentially as you have more toddlers, so if one meltdown is X, then two meltdowns are X10 and three meltdowns are X100. (It isn’t their fault; it’s a fact of nature, like gravity.) Another famous Italian espresso so close, yet so far away. Eventually, the coffee lovers ventured to a café in Magliano. “The cup was about the size of a thimble,” one described afterward. “The foam barely covered the bottom of it. But I tell you, it was enough!”

We operated with a bucket list (the only thing we didn’t get to was Venice, too far at three hours’ drive each way), but didn’t schedule anything. One day at a time. The trips to Rome and Pisa took full days but the rest of the outings were for a few hours max, leaving lots of time for relaxing, chicken fights with the older kids in the pool and cooking lessons from the villa’s owners (who didn’t speak English or French, but we did fine. I still make their tiramisu.) At dinner, we would loosely plan the next day. Or not. Sometimes we did it on the fly. Our aunt was such a wonderful traveler, always game for anything, answering “why not!” to every suggestion. She seemed perfectly content to sit overlooking the breathtaking view and read a novel, yet was always ready to hop in the van at a moment’s notice. (Another time, looking at a guide’s suggestions for what to buy in Florence, she said, “But I don’t want any of this stuff.” I love her.)

Our dad would regularly leaf through the photo albums (it was also before digital photos) for years afterward. Our mom had the villa’s brochure and some photos put into a big frame, and it moved with them to assisted living, where our parents were always more than happy to recount the adventure to all the aides who came by. The trip brought us closer together, though the littlest ones don’t remember it aside from the photos, and now there are two more kids, and even grandchildren, in the family and our parents are gone. I started writing this as a way to explain how to juggle the wildly different ages and a large group on a vacation, but in the end, it’s more an excuse to relive and immortalize the happy memories. 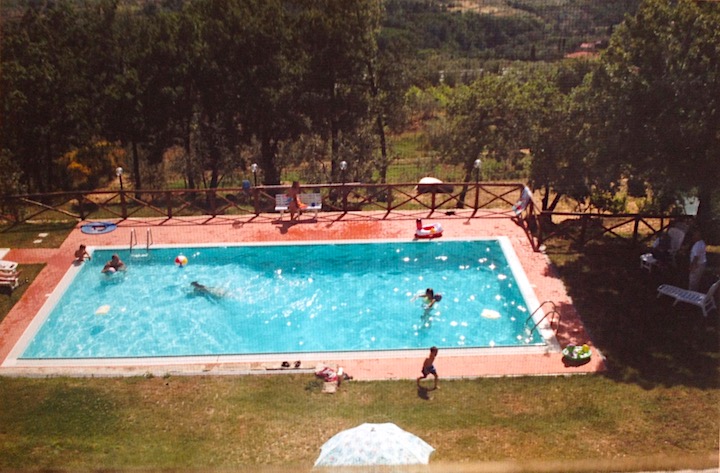 And if you wonder whether a big family trip is possible, remember: Why not!

PS: I will write soon about a similar hub-and-spoke itinerary for the south of France. We have two AirBnB apartments on the same floor, in the center of Carcassonne—they are both good for couples, but one has a small single bedroom and a sofabed, making it possible to sleep five people there plus two in the adjacent apartment. And the huge kitchen is ideal for a family.