I prepared this post last week. Today, we are in shock. Crazies again. In a little, old-fashioned supermarket. In a town where little old ladies walk around with a cane in one hand and their handbags dangling from the other. The picture of safe.

I will certainly have something to say about it later. I am glad I gave blood again this morning.

Our local bakery is awful. Shocking, but true. For years, we went to a bakery in the next village, tucked away on a barely one-way street (I say “barely” because it was practically a tunnel, lined by houses that were erected when traffic was exclusively on foot, whose walls are well-scraped by passing vehicles). The oven was wood-fired, and the baker’s wife would wear big mitts to bring out hot pain de campagne. The baker was crowded with people waiting to buy it—you snooze, you lose. While waiting (in a huddle, never in a line), they discussed the weather, and their forecasts were 100% accurate. This is not surprising in a crowd of winegrowers and other farmers and gardeners. Stooped pensioners showed up wearing their plaid flannel bedroom slippers. In winter, the heat from the oven and the people would steam the windows on the bakery, and, when I got my lumpy loaf, holding it with my sleeves because it was still too hot to handle, it would steam up the windows of my car.

Sometimes the Carnivore and I would eat the entire loaf while it was still hot enough to melt the butter, which we applied copiously. But our beloved bakers got tired of the early mornings six days a week and sold the bakery. The young guy who bought the place had his own ideas about things, and the bread wasn’t as good. He went out of business after two years. 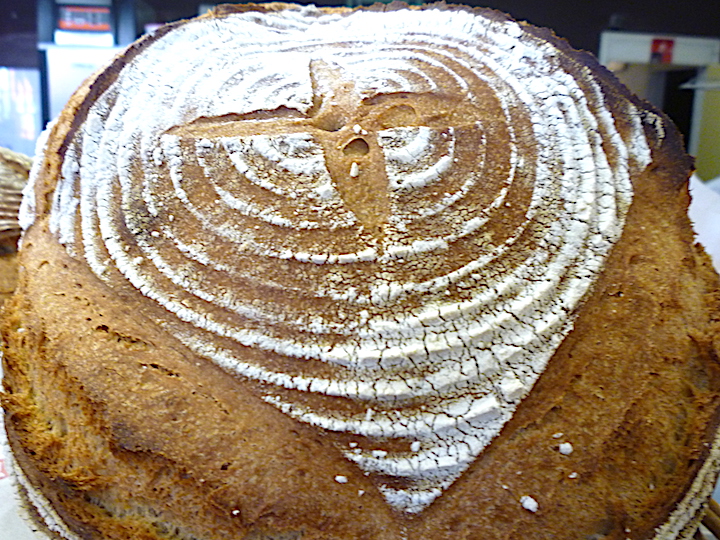 We tried other bakeries, but the problem with village bakeries is that you show up early, yet are informed that the hunters have passed by even earlier and have bought everything but a couple of éclairs, which aren’t very good for sandwiches. Or that the baker had a party the night before and is running late and so come back in an hour.

Good French bread is a revelation, but disappointing bread is practically criminal.

Though most of my friends are cook-at-home-from-scratch experts, they don’t make bread. Restaurants might pride themselves on their elaborate patisseries for dessert, but they won’t make their own bread. For bread, one goes to the boulangerie. Every day.

I had noticed this French habit long before I heard of the four banal—the banal oven, which probably played a role.

What does the word “banal” have to do with ovens? Or “banalities”? Did you know these words are related to bread? 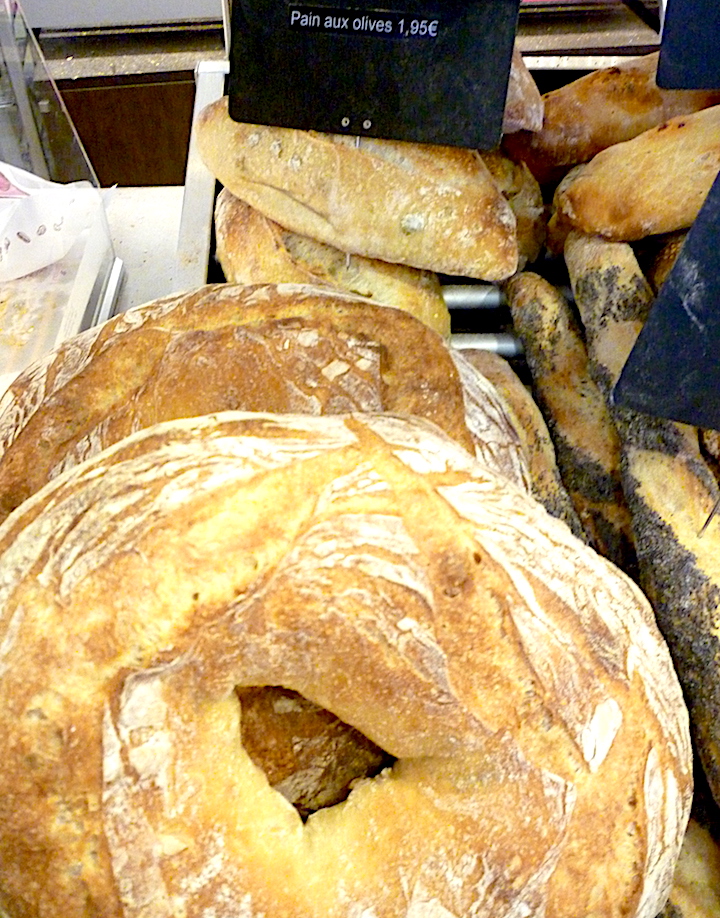 According to the French Federation of Baking Enterprises, around 50 B.C., the Romans introduced (unleavened) bread to France, having adopted it from the Greeks.

Keep in mind that people cooked over a fire, and it isn’t all that easy to translate into an oven. I did it when I lived in Africa: I made an “oven” out of a very large covered pot that I lined with pebbles, and into which I placed a smaller pot that held the bread. Necessity is the mother of invention. It was delicious, BTW.

Some people put ovens into the walls near the kitchen fireplace. Except that all these fires, including candles and lamps for light, meant that houses were burning down rather frequently. With houses sandwiched against each other, one person’s faulty chimney could quickly destroy an entire village. I saw a communal oven, with loaves waiting their turn, in Timbuktu, where not only is it safer to have a communal oven, but you wouldn’t want any extra heat in the kitchen, and wood is so scarce that it makes sense not to use fuel for individual ovens.

So the seigneurs—lords—started building separate ovens for bread, and charging the locals to use them; meanwhile they banned home ovens.

Un ban in French originally meant a public proclamation—for example les bans de mariage, the official pronouncement of a wedding engagement. As official proclamations tended to come from the lords of the château, and as lords tended to proclaim what locals could NOT do more than what was permitted, the word “ban” assumed more of its current connotation of “forbid.” 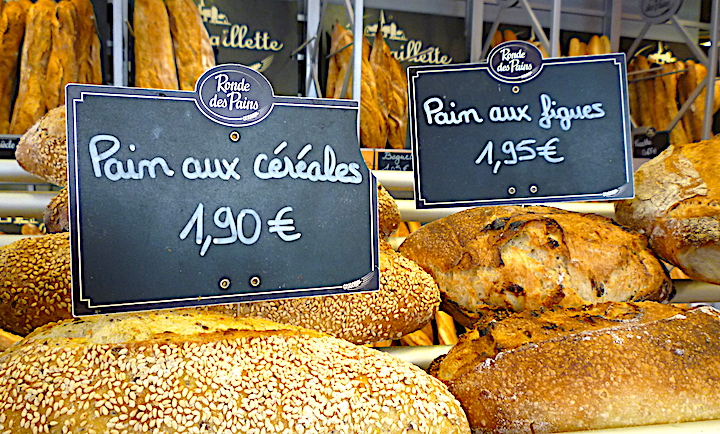 Imagine you’re living in your medieval village, you’ve made your bread, you’ve marked it with a B (seriously, everybody had to mark their bread to keep the loaves from being mixed up) and now you have to schlep over to the lord’s oven—le four banal—to throw it in the oven (for a fee). Plus, you had to bring a log to add to the fire. You might have to wait your turn. Other villagers will be there, waiting for their bread to come out. Of course, you all chat—about the weather (some things never change) and little things that happened. You see each other all the time and there’s little news to share nor is there time for delving into intellectual discussions. And thus, the word “banal” acquires its connotation of that which is idle, trivial, common or boring. Le four banal is where banalités—banalities—or fees for use of the oven (usually in kind, not in money) are exchanged.

And so you have the very bad pun of my title. I am not the only one to riff on glutton/gluten. And pain is not pain but bread, and rhymes not with rain but with hand, if you left off the nd. Kind of. Listen here. (My best title pun, if I may say so, was this one.) 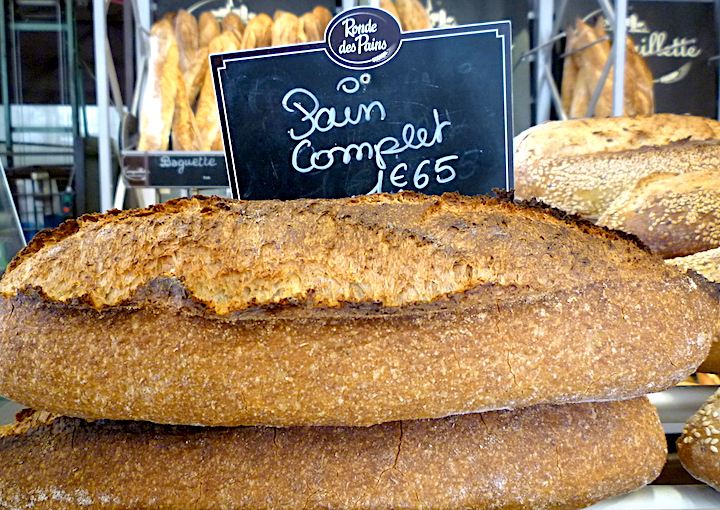 Keep in mind that until quite recently, all bread was whole-wheat bread and quite healthy. It wasn’t even salted until the 18th century, when the tax was lifted on on salt, which is related to the word salary, but that’s another monopoly and another story.

The job of baker originally started as le tamisier—the one who makes or sells sifters. Around 1200, King Philippe Auguste let the tamisiers build their own ovens, and around 1250—close to the same time the “new” city of Carcassonne was built—Saint-Louis ended the seigneurs’ rights to oven fees in cities, but these ovens continued for a few more centuries out in the countryside. The bakers joined together to control the supply of flour and bread, and it was forbidden to bake one’s bread at home. 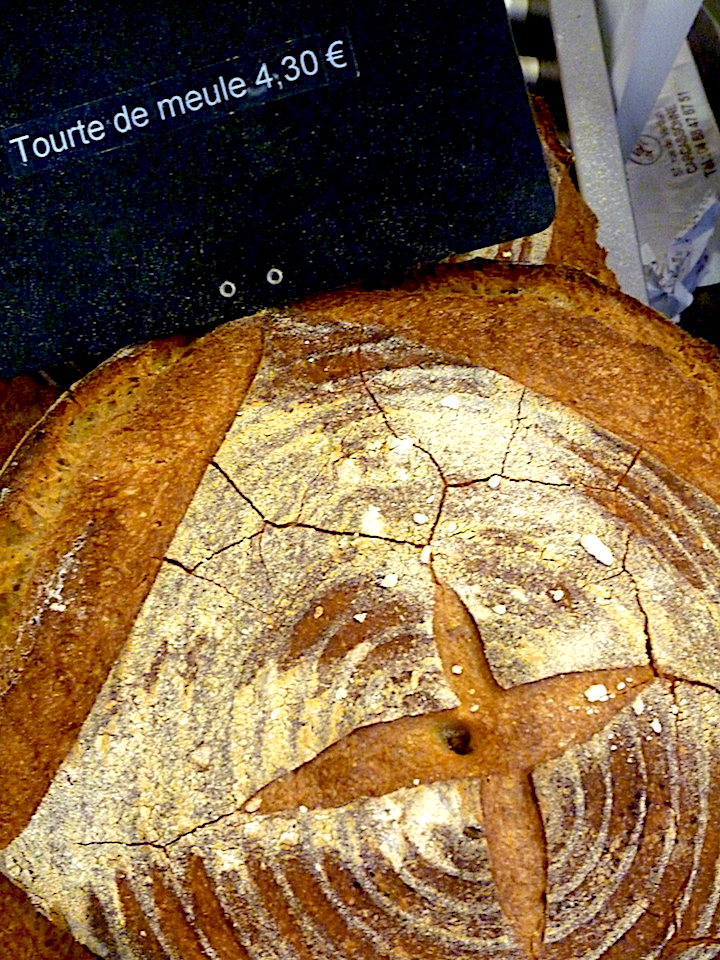 According to the FEB, it was in 1665 that a Parisian baker added some beer yeast into a light bread, making it taste better and producing a lighter bread. This was very controversial, and the medical faculty in Paris and the government itself came out against using beer yeast. However, taste won the day, because consumers demanded yeasty bread, and the ban was lifted in 1670.

Around the same time, in the 17th century, bread in a long form started to appear in Paris: le baguette, which literally means “little stick.” Baguette also refers to chopsticks, an orchestra director’s baton, and, in the case of la baguette magique, a magic wand. This symbol of France didn’t take off outside the cities until the 20th century, according to the Center for Research and Study of Bakery and Its Companions. Maybe that’s why the lumpy roundish loaf is called pain de campagne.

Very important advice: when you order a baguette in France, be sure to ask for “baguette tradition,” with a slight sour-dough taste and a chewy interior beneath a golden, bumpy crust. Do not save a couple of centimes by getting the plain old baguette, with a uniform crust and inside that resembles the foam in a mattress and that will be as hard as a rock in a couple of hours.

According to the Balladur Decree of 1993 (another decree! another bread ban!), the pain de tradition français may contain only these ingredients: wheat flour, potable water, salt and yeast, although it also can have small amounts of flour of broad beans, soybeans or wheat malt. It means that all the goodness of a baguette depends on the quality of the flour and the expertise of the baker.

The patron saint of bakers is Saint Honoré, whose feast day is May 16 (saints’ feast days are announced on TV daily with the weather report). Mark your calendar and celebrate accordingly.

37 thoughts on “A gluten for pain and other banalities”

Flowers from heaven, making dancing dappled shade on the street below.
Such a lovely morning. June is when everything is flowering and green. #southoffrance #frenchsummer
Toc toc! (That’s knock-knock in French.)
Today… I am in the center of the center of town, but what I hear are birds. The streets have barely a speck of greenery but inside, the courtyards are teeming with bucolic life. #southoffrance #hiddencourtyard #urbanjungle
How la Ville de Carcassonne mows the grass on the riverbank under the medieval fortified city. The medieval way!
What could be in this basket?
Follow Taste of France on WordPress.com