The castle ruins bristling atop hills are reminders of the religious and geopolitical strife that once tore at southern France. The Château de Puilaurens is one of the “Five Sons of Carcassonne,” built to defend France from Spain when the border was farther north of today’s line.

The first mentions of the château date to 985, when the site held the abbey of Saint-Michel-de-Cuxa. Around 1241, it became a harbor for Cathars–Carcassonne had already surrendered in 1209 in the crusade against the Cathars by Pope Innocent III. Catharism was a dismal religion that espoused that everything on earth was evil and who were ascetic to the extreme–quite the juxtaposition with the corruption in the Catholic church.

Eventually, though Puilaurens surrendered, though nobody knows exactly when, possibly around 1255. The fortress then was fortified by King Louis IX, aka Saint-Louis, to stand up to the Kingdom of Aragon (Spain wasn’t united until the 1700s). By 1659, though, the Treaty of the Pyrénées made it obsolete by moving the border south, into the Pyrénées. During the Revolution, it was abandoned completely.

It’s easy to see why. It’s in the middle of nowhere!

Which is charming in its own way.

Puilaurens makes for a nice day trip from Carcassonne, a chance to mix nature and history and to get the very different feel of the mountains.

It’s not for the weak of heart, or of legs. The path is rugged, and the last bit is the steepest, the better for archers picking off invaders. Not being a bird nor having a drone, I don’t have the bird’s-eye view, but you can see some here and others here.

One of the towers is called the White Lady tower, after Blanche de Bourbon, the granddaughter of Philip IV (aka the Fair or Handsome, but also known as the Iron King), who stayed in Puilaurens, but it’s hard to say when. Maybe on her way to be married, at age 14, to Peter the Cruel, king of Castile, who abandoned her three days after their wedding and had her locked up. So much for the alliance with France, which was the reason he married her at all. Blanche died eight years later, supposedly on orders of her husband, either by being poisoned or shot by a crossbow (but she might have gotten the plague). She supposedly haunts the grounds of Puilaurens as a white, misty apparition. However, it is often misty at Puilaurens. It’s at an altitude of more than 700 meters (2300 feet).

I don’t have good photos here of the castle’s modern conveniences–latrines and a speaking tube cut into the stone that allowed people to communicate between different floors of a tower. 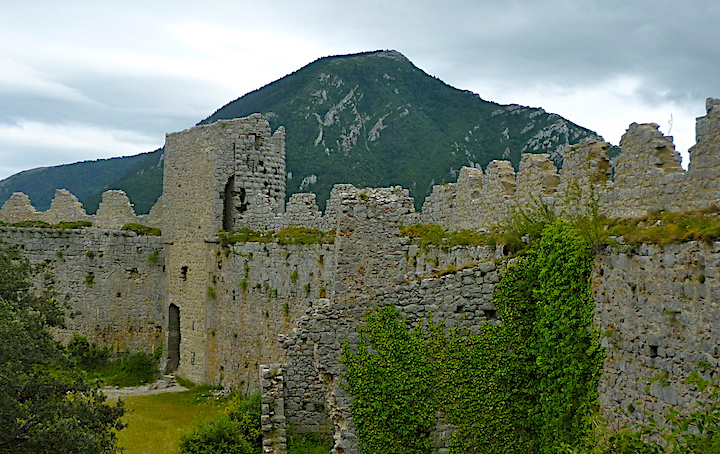 The loud bell tower of today’s blog post. It has 47 bells!! Construction started in 1279. I say when you get that old, you can make all the noise you want. #southoffrance #frenchtravel #frenchculture
Notes on a rainy morning, already the clouds have moved on and the sun has moved in. And other thoughts about summer and the south of France on the blog today. #southoffrance #carcassonne🇫🇷 #fetedelamusique #summerinfrance
Flowers from heaven, making dancing dappled shade on the street below.
Such a lovely morning. June is when everything is flowering and green. #southoffrance #frenchsummer
Toc toc! (That’s knock-knock in French.)
Today… I am in the center of the center of town, but what I hear are birds. The streets have barely a speck of greenery but inside, the courtyards are teeming with bucolic life. #southoffrance #hiddencourtyard #urbanjungle
Follow Taste of France on WordPress.com