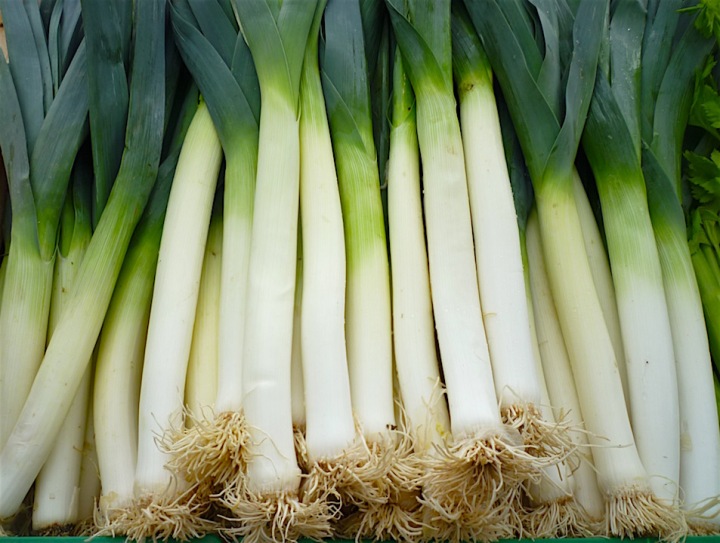 Have you ever seen a photo of the stereotypical French market basket without some leeks poking out? Of course not, because they are ALWAYS in the basket.

Yet I never ate leeks until I moved to Europe. This isn’t surprising: In this list of most-consumed vegetables in the U.S., leeks don’t even appear, yet turnip greens and mustard greens do.

In contrast, leeks turn up at No. 11 on the list of most popular veggies in France, beating out peas, cauliflower, asparagus and artichokes, among other surprises.

Or because in a chunk of France, leeks grow all year? Whatever the reason, the answer is the French love leeks, or poireaux. Not to be confused with poires (pears) or poivrons (sweet peppers). We even get wild leeks around here, like the regular ones but the size of a pencil.

While the French use them all over the place, from the “French Women Don’t Get Fat” soup to potato-leek soup to leek-and-whatever quiche and leek-and-whatever omelettes and leeks with vinaigrette and leeks gratin, I had them once in a restaurant here in France without any fuss, really just leeks, and they were awesome.

Here’s how to overcome your fear of leeks. Call it entry-level leeks. Easy beyond all the “easy” recipes I linked here (1) because I’m giving it to you in English and (2) because it’s THAT easy, yet SO good. Sometimes simple and elegant are just right.

One leek per person (more if you’re daring. I like two, myself)

A hunk of butter (at least a tablespoon; more is better and you might need more)

Leeks generally are sold whole, a good two feet long. Only the white part is considered edible. Cut your leeks at the boundary between white and green. Peel off and throw away any brown/icky leaves/layers.

Cut off the roots, but not too close. You want that button at the bottom that holds all the rings together.

Cut the white part in half lengthwise.

Cut the green part into small rings about a half an inch wide. 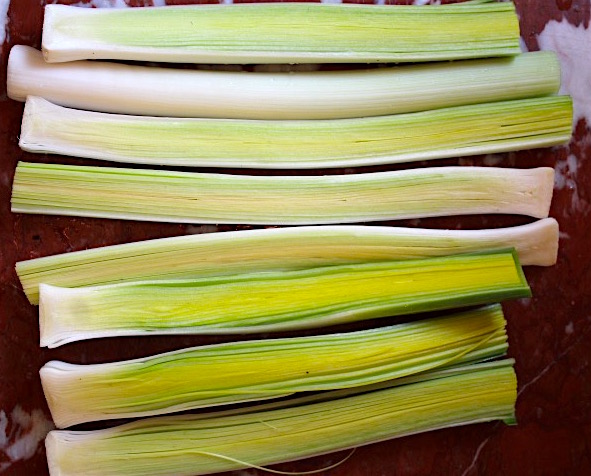 Fill the sink with cold water and put all the leeks in there to soak a few minutes. Then carefully bend the white lengths so you can see between the layers and rub out any dirt or sand. Rinse each piece and set cut side down to drain.

Vigorously swish around the little green rings. The green part is what sticks out of the ground, so it’s more likely to have dirt clinging. When the rings are clean, rinse and let drain.

I put the rings into a plastic bag and use them in soup. In this case, they went into a couscous a few days later. Usually the green part is tough, so you want to use it in a soup that will cook a long time, so it gets nice and soft. Waste not.

Over medium heat, melt the butter in a skillet that has a cover. When it has turned a little brown and isn’t bubbling any more, place the white leek lengths cut side down in the skillet. Put on the cover and have another sip of wine. 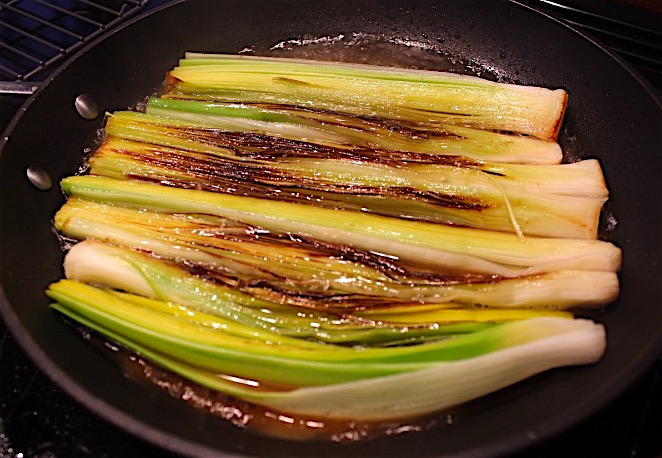 Keep a close eye, because this all depends on your stove and your skillet. Using tongs, check for when the leeks have browned. Turn them over, pour in the other glass of wine, turn the heat to low, sprinkle with salt and pepper and put the lid back on.

Leisurely finish drinking your glass of wine. Perhaps think about the other dishes you are serving with the leeks, or, if you are dedicating yourself to this noble vegetable and have delegated the other dishes to a sous-chef, crack the whip on the sous-chef.

Check the leeks occasionally; if they seem dry, turn down the heat some more and add butter.

When you have finished your aperitif of white wine (10-15 minutes), you may serve the leeks. They should be melt-in-your-mouth tender, yet not mushy.