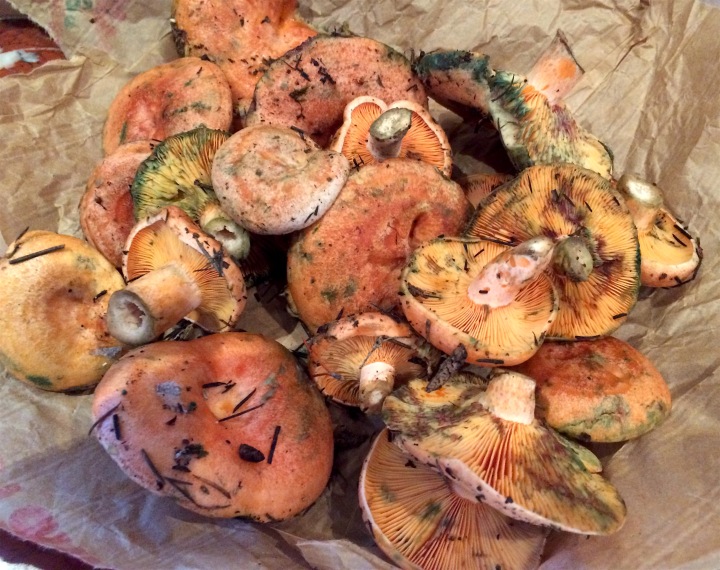 Living in France has overturned some of my long-held principles, including but not limited to a strong opposition to mushrooms.

Growing up, mushrooms were those rubbery bits that came out of a can, often in a thick, white “cream” sauce. They squeaked when you bit them. Irredeemably revolting.

I eventually made peace with raw mushrooms, and then opened up to others. (Chanterelles? YES. Truffles? Double YES.) The variety of mushrooms here is just amazing. According to the Société Mycologique de France, the country has 1,384 edible mushroom varieties out of about 16,000 species; 514 are toxic or deadly. The society has a semi-useful chart that matches the scientific name with the common French name.

We play it safe and buy our mushrooms at the market. Our No. 1 favorite, shown in the top photo, are the lactaires, also known as roussillous or russulacées, or, more specifically, the lactaire délicieux. Yup. The Latin name is Lactarius deliciosus, so it’s official. 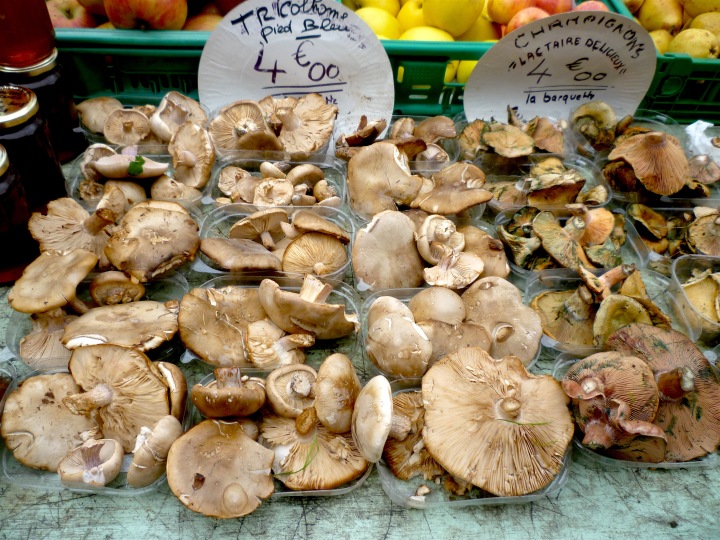 If you think the name sounds related to milk, you are right–they emit a milky substance when the cap or spores are broken. Since the name of the Milky Way in French is la voie lactée, somehow my mind puts these mushrooms amid the stars, which I find fitting, because they are heaven on a plate. 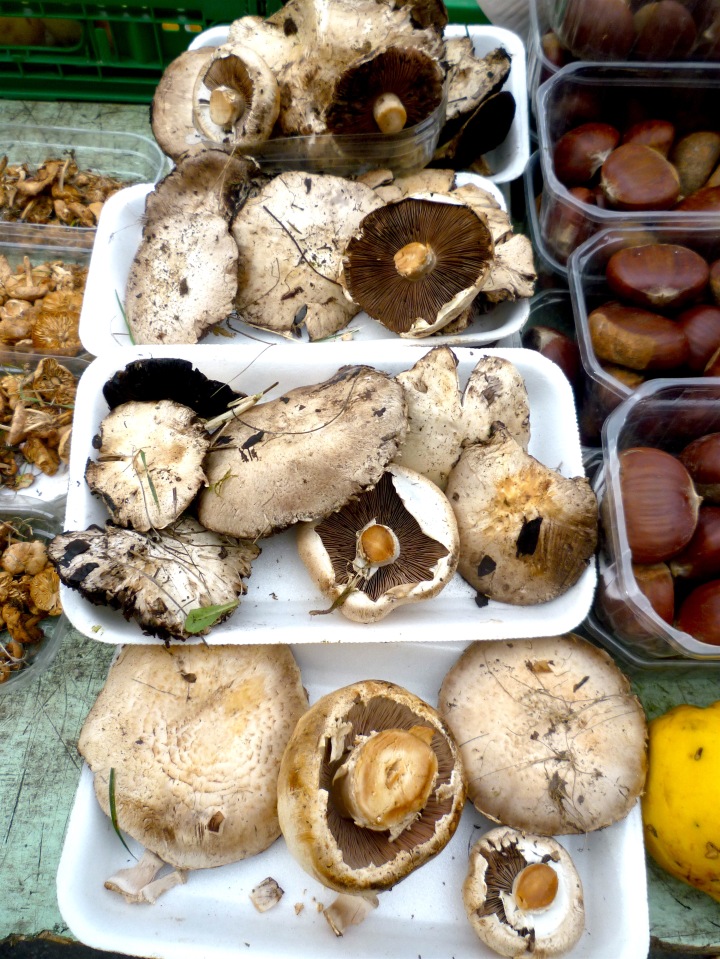 There are a couple of ways to cook lactaires: straight up in butter or in a persillade of chopped parsley, garlic and butter. Here’s how:

Step 1: Clean them. You might notice that the wild mushrooms pictured above have pine needles and grass and dirt on them. Wipe off the tops with a damp paper towel and gently brush the underneath. Be gentle! Set them out to dry.

Step 2: cut off the bottoms of the stems. You can chop up the rest of the steps to cook.

Step 3.: Make your persillade, if you’re going that route: Finely chop a small bunch of parsley and a couple of garlic cloves.

Step 4: Melt some butter (don’t be stingy) in a frying pan over medium heat. Prepare yourself for amazing fragrance. They smell a little like a white cake baking. They don’t taste sweet, but the flavor is delicate. Cook stem-side up. Don’t turn. 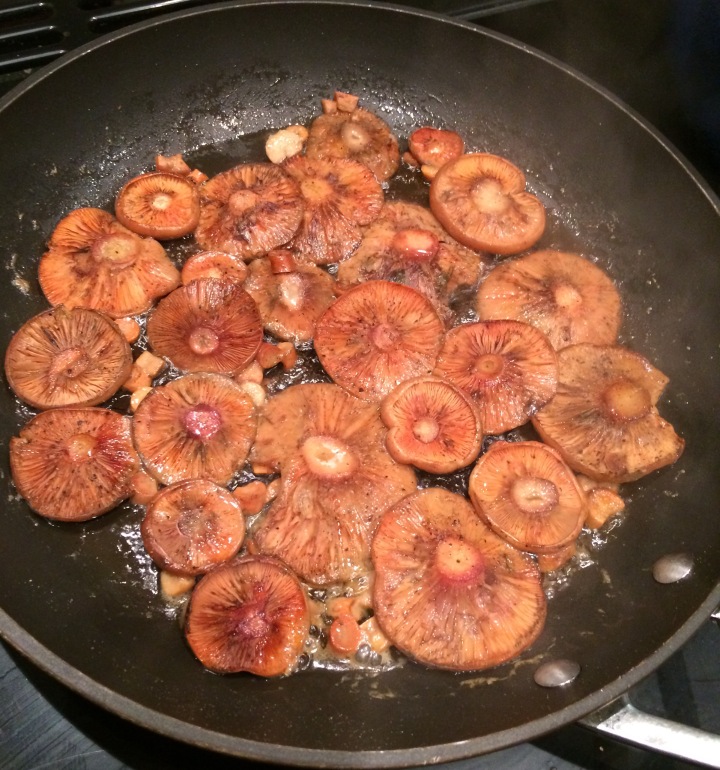 They’re done when they’re hot and have browned ever so slightly. We had them with pan-fried steak, roasted tomatoes (we still get garden tomatoes!) and little grenaille potatoes.

And now for a few beautiful, but not-for-humans, mushroom marvels:

The next one looked for all the world like a Thumbelina version of a chopped-down tree:

This one was also very flat, but the top glowed translucent, like polished stone: 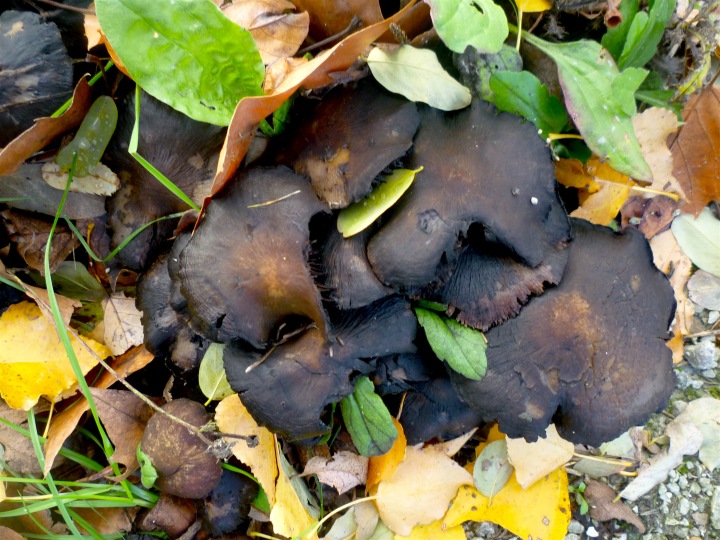 38 thoughts on “Yum! Fungus Among Us”