If your kid likes a vegetable, serve it.

It’s the second rule of parenting, right after “Never wake a sleeping baby.”

I love vegetables, but beets never made the list of my favorites. However, when your kid declares that beets are delicious and is excited when they’re on the school lunch menu, it’s time to give them another try.

I did the diced and steamed version, like they serve at school. The kid ate them up. The adults, not so thrilled.

I did beet slaw, similar to carrottes râpées often served in restaurants and at school, though I dressed it with vinegar and oil rather than mayonnaise. It was OK, but very…beety.

I decided to try something else. We often have a very American kind of chopped salad, which my kid and I love but not my husband. Like many people here, he has an aversion to raw vegetables. To him (and judging by restaurant menus, he isn’t alone), a salad is a bowl of lettuce. You can garnish it with slices of dried duck breast, goose gizzards, foie gras, ham, hard sausage and/or bacon chunks, but DO NOT add other raw vegetables! Maybe a wedge or two of tomato. A thin slice of cucumber, peeled and seeded, might pass, or, more likely, be shoved to the side of the plate like a limp leaf of parsley.

When we entertain, I always do a plate of crudités with ranch dip. It’s a huge hit. But it’s true that French guests stick to the carrots and cherry tomatoes while the peppers and cucumbers languish. It’s mind-boggling because the vegetables here are fantastic.

Anyway, I decided to do a chopped salad with with beets, along with other vegetables that wouldn’t look disgusting once tinted with beet juice. Speaking of beet juice, wear an apron so you don’t ruin your clothes! 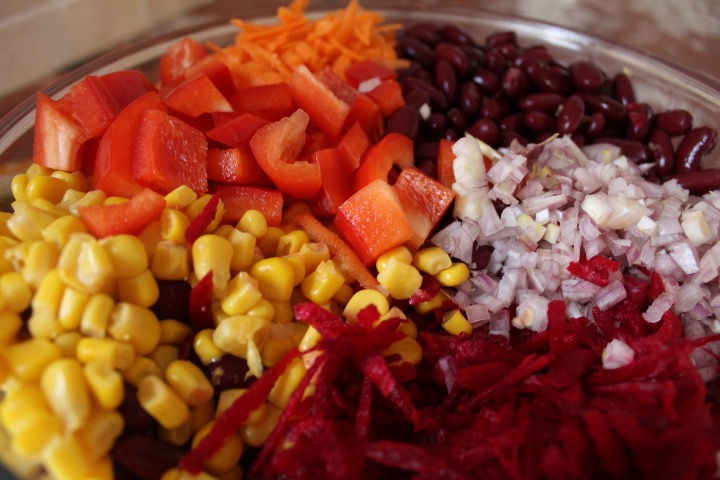 I use a shallot—milder than onion. Green onions or scallions also could work. You’ll see that I consider recipes to be general suggestions and not at all something to follow to the letter.

The secret ingredient is Maggi seasoning sauce. I was introduced to it recently at the home of a Belgian friend who’s a fabulous cook. She used it in her salad dressing and it gave a little hit of umami. It’s one of those things where a tiny bit has a big effect. It looks like you can get it on Amazon.

1 beet a little bigger than fist-size

Peel the beet and carrots. Grate them with a box grater or a food processor.

Mince the shallot and pepper.

Drain and rinse the beans.

Put everything in a big bowl and toss. Season with a little sea salt and pepper. I circle three times quickly with the olive oil, and once with the vinegar (I never measure). Then I give two or three shakes of Maggi seasoning sauce.

I also make a version substituting red quinoa for the corn and beans. Either one gives you protein and lots of fiber.

Do you eat beets?