The market isn’t limited to fruits and vegetables. A block away from the produce at Place Carnot are les Halles Prosper Montagné, named after the Carcassonne native who wrote the first Larousse Gastronomique, the bible of French cooking. 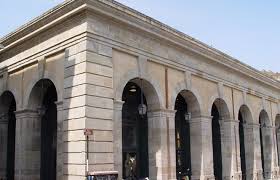 Les Halles are indoors, built in 1768 next to les Halles aux Grains—the former grain market, today a public library for youth. Les Halles are for not for vegans.

For example, there are several butcher stands selling all kinds of meats. There are big hunks of beef, waiting to be carved on order into steaks. Thin? Thick? Extra thick?

There are dozens of varieties of pâtés. 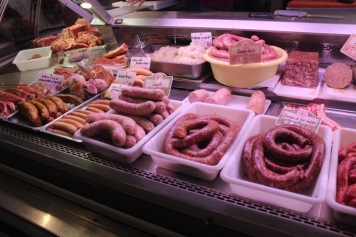 Poultry is in a class by itself. You have whole birds—chickens, geese, ducks, turkeys— 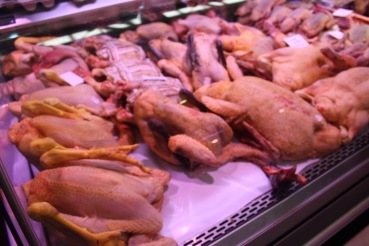 always with the head on because it shows whether the bird is young and tender or old and not. They’ll cut it off for you if you aren’t up for doing it yourself.

There are birds of every size, down to little quail and pigeons. 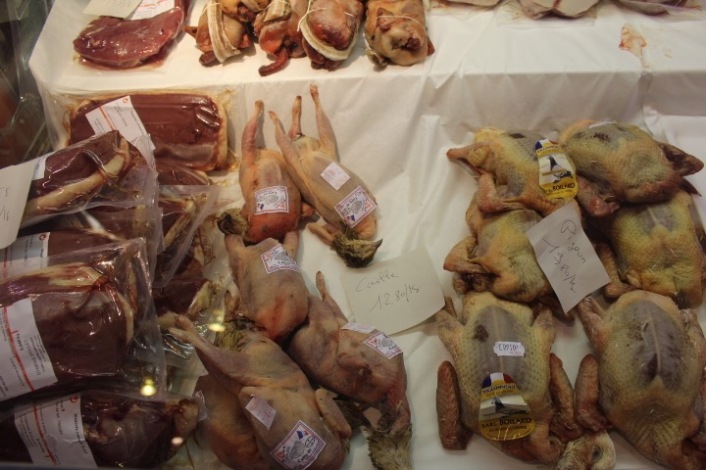 The seafood stands are another marvel. They don’t stink at all—proof that the goods are fresh from the nearby sea.

There are plenty of dishes ready to pop into the oven: escargot, cassoulet, lasagne and more. 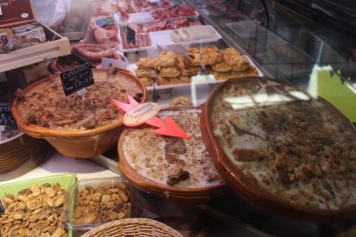 Cassoulet for a crowd

And let’s not forget the cheese. There are several cheese merchants at Place Carnot, and in rue de Verdun, as well as vendors of yogurt, goat’s milk, and other specialties.

Here’s a video with a local historian (so it’s in French, with his wonderful southern accent), explaining how les Halles came to be: http://www.carcassonne.org/fr/le-siècle-des-lumières-les-halles

The square carries a German name since 1976, when the former “Place du Pilori”—yes, Place of the Pillory!!—was renamed for Carcassonne’s sister city, Eggenfelden.